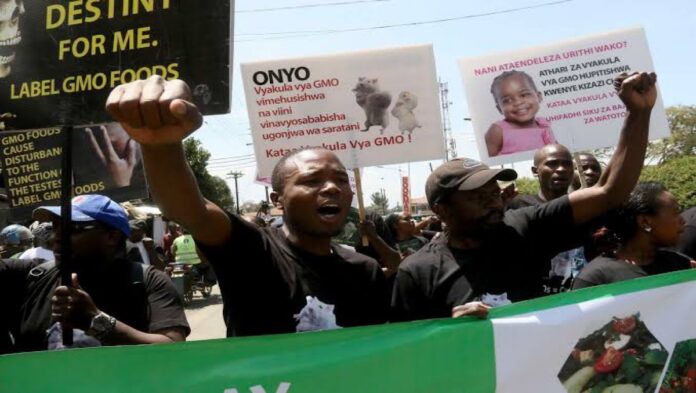 “An inductive order prohibits the importation and distribution of genetically modified crops and food,” the decision was issued by Judge Mujur Thandi, who added that the decision will take effect at close of business Monday.

The court, in ruling on the lawsuit filed by a farmer lobby called the Kenya Peasants’ Association, said the lawsuit is pending a hearing and decision.

Open farming and the import of genetically modified crops have been banned in the east African country since November 2012, but the government lifted the ban in October in response to the worst drought the country has faced in 40 years.

East Africa faces severe food insecurity due to the impact of a severe drought after at least three years of no rainy season.

The court orders, signed by Judge Mujur Thandi, bar the government from issuing any guidelines related to GMOs or implementing the Cabinet decision announcing the lifting of the ban on GMOs.

A group in Kenya claims that genetically modified products pose a health risk to Kenyans, particularly the poor and low-income earners. It also claims that the government lifted the ban without engaging Kenyans through public participation, as required by the constitution.

The group opposes the import, cultivation and consumption of GMOs.

The first lawsuit was filed last month by Mr. Paul Mwangi. He sued the government for removing decades-old regulatory barriers to GM crops and withholding public information about GM crops.

He accused the government of victimization and said the decision was hasty and, if not reversed, would result in violations of the rights of small farmers and consumers.

Mister. Mwangi explained that the Oct. 3 cabinet decision will lead to the disappearance of original seeds and pave the way for the commercial practice of protecting patent rights for GM seeds.