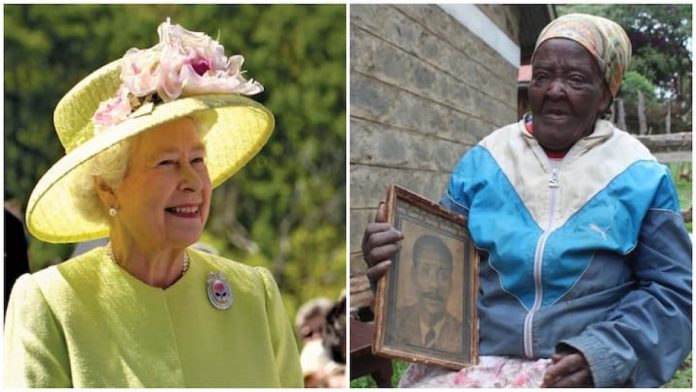 Muthoni Mathenge, a Kenyan granny, has openly demanded that Queen Elizabeth II compensate her for being tortured by British forces during the country’s independence struggle in 1952.

“Let Elizabeth bring what I own directly to me, with no intermediaries,” Mathenga explained, stating quite vividly that she hopes to be compensated directly from the British Monarch because she was and remains the leader of Britain even at the time of the cited incident.

To further display her seriousness and need for compensation, Muthoni showed scars on her body as confirmation of her assertions. “If you look at this leg, you’ll notice it’s been hacked twice with an axe,” she stated, while speaking to local reporters.

According to local sources, the Kenyan Granny and “survivor” was married to a man who was a member of the Mau Mau rebellion against British rule in the mid-twentieth century.

Sources claim that the army went to Muthoni’s house searching for her husband after a crackdown on the top members of the rebellion. However, they didn’t find her husband, rather, they unfortunately found her. On discovering that her husband had gone into the forest, Muthoni claimed that the army savagely abused her, leaving her with serious injuries.

In her attempt at getting compensated, the Kenyan Granny will only be joining several Kenyans who have also openly demanded compensation from the British government for actions against them in the past.

In a letter to Prince William dated May 4, lawyer Joel Kimutai Bosek requested compensation for land taken from Kenyans. Bosek requested that the Duke of Cambridge assist in the compensation of the victims, who he alleged were forcibly evicted from their houses to allow white settlers to construct tea plantations.

“Our people were forcibly displaced from their houses to make room for the highly profitable tea plantations that still exist today,” Bosek said. “While attempting to fight the evictions, numerous men and women were raped, unfairly jailed, and in some cases killed, the Kenyan Lawyer added.

“We are turning to you now, 70 years later, as a group of over 100,000 victims from Kericho whose suffering as a result of this period has been entirely ignored by your family and successive British governments,” Bosek’s letter read in part.