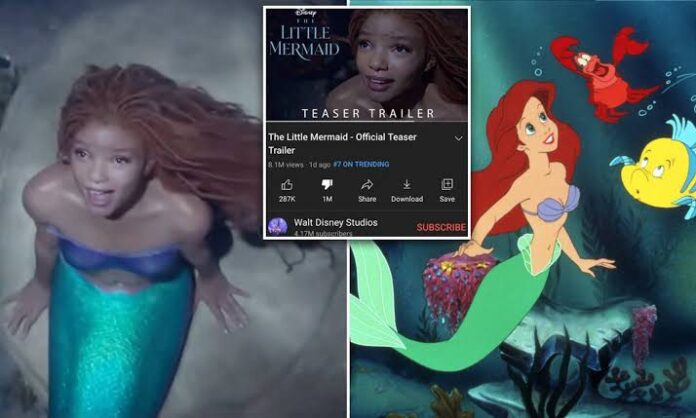 A trailer for Disney’s live-action version of The Little Mermaid racked up over 1.5 million dislikes on YouTube after its star, Halle Bailey, faced a racist backlash from trolls on Twitter after being cast in the lead role.

The backlash to the movie’s official trailer – the first real glimpse of the film – has been so severe that YouTube has now turned off the dislike count, but not before it hits 1.5 million.

For many, the trailer was an exciting first look at the live-action version of the iconic Disney princess story, which saw parents all over the world share cute videos of their children watching in awe as the clip played.

However, alongside the excitement and praise surrounding the film, there was also a bitter wave of racial backlash over Disney’s decision to cast a black woman in the lead role.

The Little Mermaid is the live-action adaptation of the Disney princess movie, starring adult actress Halle, 22, from Los Angeles, California, in the iconic role of Ariel.

Despite hundreds of thousands of fans waiting for the film’s teaser, the clip was met with very mixed reviews.

Although YouTube has turned off dislike counting, many social media geniuses have installed a popular extension that shows how many people disliked a video.

Many critics criticized Disney for its visuals, noting that it doesn’t look like the princess is underwater, while others attacked Halle and director Rob Marshall for choosing the star.

There was no lack of reaction following Disney’s announcement that Halle would play the mermaid Ariel in the adaptation.

Many of the online attacks have been tinged with racism, with trolls targeting Disney and its new protagonist over the decision to cast a black woman as a fictional character who has been widely portrayed as white in previous pop culture offerings, including the popular Disney animated series from 1989.

Trolls took to Twitter to spread racial slurs using the hashtag #NotmyAriel and called Disney’s decision to cast a black woman in the movie #woke.

While others said that “switching races is not good” and claimed that the film was “a waste of money”.

In response to online criticism, Halle told PEOPLE that she focused on her role’s meaning rather than hate.