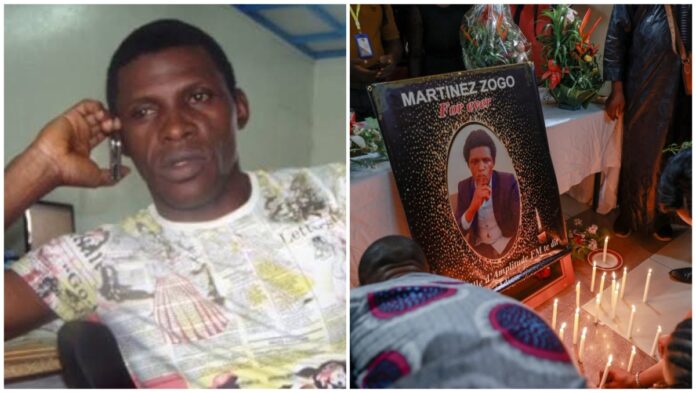 A popular Cameroonian Radio journalist, Martinez Zogo, who disappeared after what a media rights group described as a kidnapping has died, his employer and police said on Sunday.

Martinez Zogo was the managing director of the private radio station Amplitude FM in Yaoundé and the main presenter of the popular daytime show Embouteillage (Gridlock).

The 51-year-old has regularly dealt with corruption cases on air and does not hesitate to question VIPs by name. According to his employers, he has been missing since Tuesday.

“I drove to Ipogo (15 kilometers north of Yaoundé) this morning, where I saw and identified the body of Martínez Zogo. The Deputy Attorney General was present and his wife was there to identify him,” said Charly Tchouemou, Editor-in-Head of Radio Amplitude FM, Charly Tchouemou.

A police source, who wished to remain anonymous, confirmed Zogu’s death to AFP.

Also, read; Burkina Faso Ends French Military Accord, Says It Will Defend Itself

A large crowd gathered as Zogu’s body was taken to the morgue of Yaoundé Central Hospital for an autopsy, a family member of the victim told AFP on condition of anonymity.

After his disappearance, posts circulated on social media condemning the “brutal kidnapping of a journalist” by Reporters Without Borders (RSF).

According to Reporters Without Borders, Zogo’s badly damaged car was found outside a police station in a suburb of the Cameroonian capital Yaoundé on Tuesday.

“There is a lot of gray area surrounding the circumstances of his brutal abduction,” Sadibo Marong, Sub-Saharan Africa director for Reporters Without Borders, told AFP.

“The authorities must conduct a rigorous, thorough and independent investigation to determine the full chain of responsibilities and circumstances that led to this unfortunate event,” Marong said.

Cameroon’s National Union of Journalists condemned the “heinous murder” and urged media workers to wear black on January 25 as a sign of mourning.

The International Press Institute, a Vienna-based press freedom organization, called on the Cameroonian authorities “to immediately investigate the horrific murder and ensure those responsible are brought to justice.”