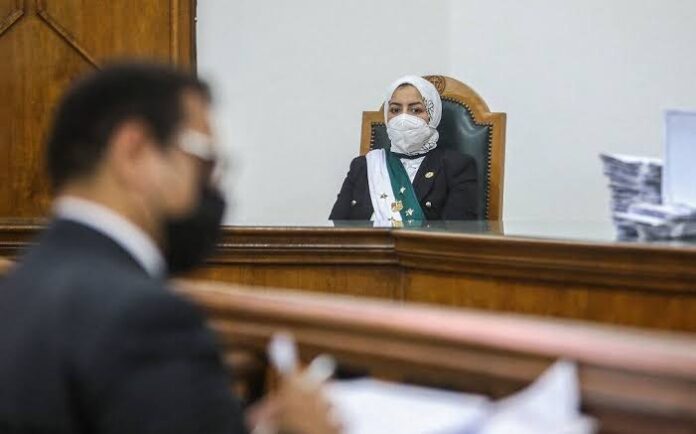 Judge Radwa Helmi made history as the first woman judge to sit on the bench of Egypt’s State Council, a top court in the country on Saturday. Helmi, who made her appearance in a Cairo courthouse, was among 98 women appointed last year to join the council; one of Egypt’s main judicial bodies, following a decision by President Abdel-Fattah el-Sissi.

“The 5th of March has become a new historical day for Egyptian women,”; the head of the National Council for Women (NCW), Maya Morsi said. The move also came ahead of the March 8 International Women’s Day.

Women in Egypt have been fighting an uphill battle for years to secure their rights, this is because; although Egypt has hundreds of women lawyers it took decades for one to move up the judicial ladder and become a judge.

Although no Egyptian law that bars women from being justices in the country, the judiciary in the conservative Muslim-majority country however has traditionally been a male preserve.

According to timesofisrael, The State Council was set up in 1946 as an independent body which mainly adjudicates in administrative disputes and disciplinary cases.

Since Egypt’s founding as a modern state in the 19th century; women have been reported to be marginalized.

Women gained the right to vote and run for public office in 1956, but their personal rights have remained limited.

Radwa Helmi is a win for Women in Egypt

In Egypt, women currently hold about a quarter of cabinet posts and some 168 seats in the 569-member parliament.

In May 2021, the grand imam of the prestigious Cairo-based Al-Azhar, Egypt’s highest Sunni institution, weighed in on the debate.

Though, the Sheikh Ahmed al-Tayeb said no religious edict prevents women from holding high-ranking posts; traveling alone or having an equitable share of inheritance rights; he however stopped short of stating that women should have equal rights to men.

Radwa Helmi, at a press conference, thanked Egyptian President al-Sisi for taking a historic decision that she described as “an essential part of supporting every Egyptian woman”, jurist.org reported.