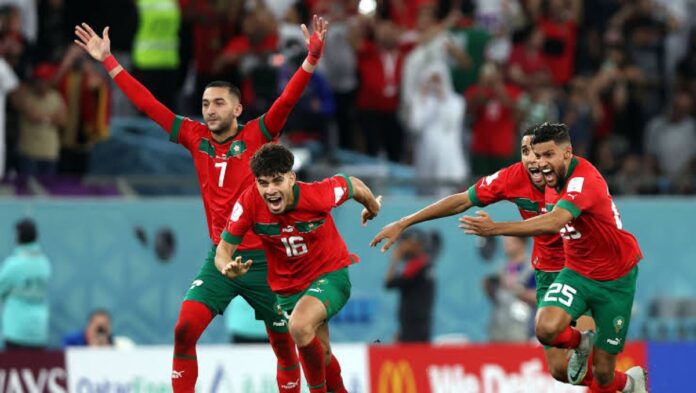 The conversion of three penalties into goals saw Morocco qualify for the quarter-finals of the World Cup for the first time while Spain was eliminated in the last 16 of the World Cup this Tuesday, played at Doha’s Education City Stadium.

Morocco created the best of their few chances in the first half, including a close-range header from defender Nayef Aguird that went over after Marco Asensio missed a goal for Spain.

Morocco will play Portugal or Switzerland in the quarterfinals depending on the outcome of the game between both nations.

Recall that Morocco earlier qualified for the last 16 of the FIFA World Cup after beating Canada 2-1 in Thursday’s Group F match at Thumama Stadium.

Also, read; Senegal Bows Out of The World Cup, Leaving Morocco As The Only African Nation in The Tournament

This is the first time they have qualified for the knockout stages since the 1986 World Cup, when Morocco lost to West Germany in the round of 16.

Hakim Ziyech scored the second goal of that edition in the fourth minute to advance early for the African nation. Youssef Al-Nusairi did the same and extended the lead with a powerful shot into the penalty area.

Quality goals from Jordan Henderson, Harry Kane and Bukayo Saka propelled England to the quarter-finals of the World Cup.

England was slow to gain ground against the African champions, a side they had never seen before and endured two scares before two late goals changed the mood of the evening.