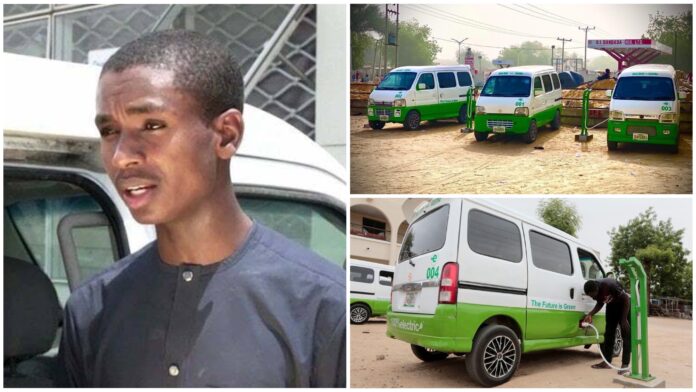 Mustapha Gajibo, a Nigerian indigenous automaker has fulfilled his promise of releasing another set of electric-powered 12-seater buses to aid transportation in Nigeria.

In a recent tweet, the entrepreneur stated that the released buses have begun operations in Maiduguri and have so far recorded 21,000 passengers at 50 naira instead of the regular amount of 100 naira.

The Nigerian entrepreneur, Mustapha Gajibo has been converting petrol mini-buses into electric vehicles at his workshop, but he is now going a step further to build solar battery-powered buses from scratch in a push to promote clean energy and curb pollution.

Africa’s top producer and exporter of crude oil have heavily-subsidized gasoline and a patchy supply of electricity- a combination that might discourage anyone from investing in electric vehicles.

However, Gajibo, a 30-year-old university drop-out and resident of Maiduguri city in Nigeria’s northeast, is undaunted. According to him, electric vehicles are a viable choice in Nigeria due to pollution and the rise in global oil prices.

He has already removed the combustion engines from 10 minibuses at his workshop and replaced them with solar batteries.

According to him, the buses, which have been in service for a little over a month, can travel 100 kilometres on a single charge.

The process of building the buses from scratch is his most ambitious undertaking. They will be furnished with batteries and solar panels.

In his earlier interview with Reuters, he revealed that he and his team were building a 12-seater bus at his workshop that can travel up to 200 kilometers on a single charge, Gajibo stated.

“We are going to unveil that bus before the end of this month,” he said, adding that it would be the first of its kind in all of Nigeria. He also mentioned that his workshop could make 15 buses per month.

In fulfilling his promise, the entrepreneur has indeed released the buses, built from scratched and powered by electricity as he promised.

Due to their expensive nature and the problem of insufficient electricity caused by lack of infrastructure, there are no avenues for charging said vehicles, causing electric vehicles to have not yet taken off in Nigeria, like in the majority of Africa.

For now, Gajibo has one charging station powered by solar energy.

Although, there are other hurdles like foreign currency shortages that make it difficult to import parts, the entrepreneur has resulted to sourcing them in Nigeria.

“We have been substituting some materials with local materials to bring our costs down and maximise profit,” said Gajibo.