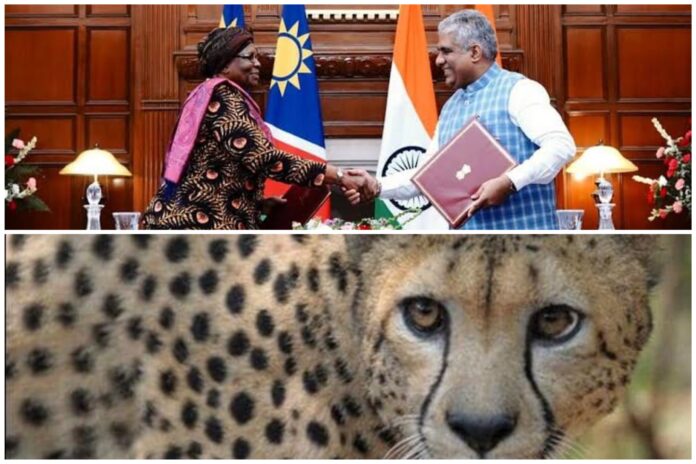 India and Namibia have signed a deal to bring cheetahs to the forests of the South Asian country, where the big wild cat went extinct 70 years ago.

According to the agreement signed on Wednesday, eight African cheetahs will be transferred from Namibia to India in August for captive breeding at the Kuno National Park (KNP) wildlife sanctuary in the central Indian state of Madhya Pradesh.

Indian officials said the “ambitious” project is expected to bring 12 more African cheetahs from South Africa to the park, although a formal agreement has yet to be signed between the two countries.

“The main objective of the cheetah reintroduction project is to establish a viable metapopulation of cheetahs in India, which will enable the cheetah to fulfill its functional role as a top predator,” said a statement from India’s Environment Ministry.

The arrival of the cheetahs is expected to coincide with celebrations of India’s 75th Independence Day on August 15, 2022.

In another tweet, he said, “The reintroduction of the cheetah in India has a larger purpose of restoring the ecological function in the Indian grasslands that was lost due to the extinction of the Asiatic cheetah.”

According to a statement from the Environment Ministry, the KNP can currently house up to 21 cheetahs, but after restoring a larger landscape, its capacity will be increased to around 36.

The cheetah, the fastest land animal, is on the verge of extinction and is classified as a vulnerable species on the IUCN Red List of Threatened Species. An estimated 7,000 cheetahs remain in the wild, and almost all of them in Africa.

The global decline in the wild cat’s numbers is primarily attributed to habitat destruction and poaching. Hunting, habitat loss and food shortages have led to the animal’s extinction in India.

It is believed that more than 10,000 Asiatic cheetahs roamed the Indian jungle in the 16th century.

The cheetah population in India declined in the 19th century, largely due to bounty hunting by local Indian kings and British officials.

The last three Asiatic cheetahs were hunted by an Indian king in central India in 1948. In 1952, the cheetah was formally declared extinct in the country.

Today, only a dozen Asiatic cheetahs remain in the wild—all in Iran.

In 2010, India began trying to revive the cheetah population in the KNP Conservation Area by introducing African bred wild cats. But in 2012 an Indian court halted the project, finding it would conflict with an ongoing plan to introduce lions into the sanctuary.

In 2020, India’s Supreme Court announced that African cheetahs could be introduced on a trial basis at a “carefully selected site” in India. Since then, India has been trying to ship the African cheetahs.

Indian authorities hope that the plan to introduce the animals to India will be successful this time and the country will be able to revive its cheetah population.