Nana Olomu: The Nigerian Millionaire who made slave trade difficult for British 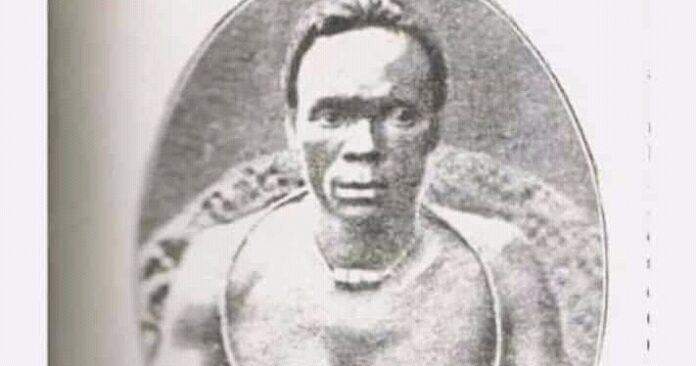 Nana Olomu, born in Jakpa in 1852, was an Itsekiri chief and palm oil merchant who served as the comey collector.

He was basically the chief tax officer, and thus the Governor of the Benin River area between 1886 and 1894, making him the fourth Itsekiri to hold this position.

During this revolutionary period in Benin River region politics, Nana was the head of the Itsekiri, fulfilling all tasks of the Olu, or king, with the exception of the spiritual, which remained the sole domain of the Olotu, or regent of the suspended Olu title.

Nana Olomu gained millions in the nineteenth century, becoming one of the greatest Africans to achieve such a feat in his time, but it is his influence in ensuring that he fought against British persecution that makes his story even more historic.

Nana Olomu had little education, but with persistence, hard effort, and a keen mind for passion and the well-being of his people, he inherited riches and multiplied it.

As a result, he rose to become one of Nigeria’s most powerful individuals, helping to save his people from their ignorance.

Nana lived in a creek near the mouth of the Benin River as a powerful nineteenth-century indigenous entrepreneur and great millionaire, alongside Oba Ovonramwen of Benin (another powerful and influential figure) as two powerful Africans who successfully prevented European penetration of the Benin’s hinterland and its nearby rivers.

Nana inherited most of his wealth, but through monopolizing commerce, he was able to develop his firm. Nana built a magnificent palace around the turn of the century to represent the majesty of his achievements.

This structure kept his personal things as well as evidence of his interactions with the Queen, British Empire rulers, and traders.

Many European merchants, missionaries, explorers, and consular officers who visited the Benin River in the second half of the last century and had the opportunity to meet Chief Nana admired his excellent personality, intelligence, wealth, and hospitality.

His ability to speak Urhobo, combined with his generosity, won him the favor of nearly all Urhobo traders on the River.

Nana Olomu learned and understood a few words of the European language after interacting with them for a long time. This aided him in interpreting texts intended to oppress his people.

Nana Olomu, for example, well comprehended the immediate import of British colonial aspirations in the Niger Delta during the age of treaty signing in Nigeria.

He was able to strike down objectionable articles that granted British traders unfettered access to trade wherever they wished in his dominion. His uncooperative attitudes were the catalyst for the Ebrohimi expedition of 1894.

Nana Olumo as the Governor of Benin Rivers

Nana took over as Governor of the Benin Rivers region when his predecessor, Chanomi, who was an old rival of his father’s, refused the staff of office, which had been taken away by the British following complaints of his misrule.

Nana was the son of Olomu, who was the maternal nephew of Olu Akengbuwa, the previous Olu before the 88-year interregnum that restored the supremacy of the governor’s position.

The feud between Olomu, Nana’s father, and Governor Chinomi motivated Chinamoni’s family to elevate the most promising of their own into being a strong opponent to Olomu’s family.

Nana Olomu was the last in a line of governors that began with the installation of Chief Idiare in 1851 by John Beecroft, who had been appointed by the British Government as Consul for the Bights of Benin and Biafra in 1849.

Chief Idiare, Idibofun, Olomu (Nana’s father), and a number of other elders later signed a treaty with Beecroft to safeguard trade in the area.

Numa of the Batere Emaye line, the family that was supposed to replace Olomu, resolved to avenge their family’s shame. Dogho (Dore Numa), a capitalist dictator and son of the Emaye dynasty, rose and provided the British with crucial assistance in defeating Nana.

It is a historical fact that Nana possessed enough force to subdue anyone who dared to interfere with his trade wherever, including the colonial authorities. For many years, he focused his commercial efforts on the Urhobo oil markets, eventually establishing a near-perfect monopoly over all oil markets.

He was said to have a fleet of 200 trade canoes and another 100 war canoes capable of transporting 20,000 war boys. Indeed, following his defeat in 1884, the firearms captured in Ebrohimi included 106 cannons, 445 blunderbusses, 640 firearms, 10 revolvers, 1640 kegs of gunpowder, and 2500 rounds of machine gun ammunition.

With such a formidable military force, immense wealth and clout were important factors in his dominant market share of the palm oil trade.

The fall of Nana Olumu

Major Claude Macdonald, the British Commissioner and Consul General for the Oil Rivers Protectorate in 1887, falsely accused Nana Olomu of disrupting commercial activities in the Niger Delta, terrorizing the Urhobo and turning them against the British, engaging in the inhuman slave trade, and, most blatantly, practicing human sacrifice.

Nana’s main crime, however, was that his riches, position, and authority gave him significant control over the areas surrounding the Benin River and the Warri zone, making infiltration of British traders extremely difficult, if not impossible.

Because of his obvious power, accusations began to fly about Nana’s personality, and by the end of 1893, the Vice Consuls in Benin River had begun to accuse the chief of extreme hostility to the government. He primarily accomplished this through his trading guys.

These claims seemed to reach a peak in July 1894, when his boys seized fifteen Urhobo individuals (including a local chief’s wife) for an alleged palm-oil debt of 200 puncheons.

When Chief Nana Olomu refused to deliver those captives, instead blockading the River, the government was forced to use force to depose him near the end of 1894.

Nana was for that reason arrested following the end of his struggle with the British and exiled to the Gold Coast (Ghana).

A letter from Olomu was also enclosed, in which he complained that the upkeep was insufficient to support himself and five other people.

In his response, the then-Prime Minister, the Marquis of Salisbury, offered to investigate the chief’s living conditions but ruled out the idea of his return to his homeland.

A month later, the issue of his treatment was addressed in parliament, and the administration once again declared that allowing his return would be dangerous.

In 1891, the British attempted to undercut Nana’s economic interests by opening another Vice-Consulate at Sapele, in addition to the one on the Benin River, in order to infiltrate the hinterland and restrict trade on the Benin River, which was his main source of revenue.

Nana, on the other hand, countered by sending his spies to Sapele as well. The British were startled to learn that his agents had complete control of the trade and that his trading power was enormous.

Indeed, he was powerful and wealthy enough to set his own trade terms, to halt commerce when it suited his fancy, and to refuse to trust European enterprises.

Nana is said to have halted all trade in 1886 and 1892 in order to force English merchants to pay greater prices. Opposition to Nana arose not only among merchants but also among Itsekiri traders, such as Dore Numa, who had suffered as a result of Nana’s monopoly.

As a result, the British invaded Ebrohimi in 1894. Nana responded by strengthening his capital even more. From then on, his fight was bitter and audacious.

Nana Olomu employed a combination of conventional and guerilla warfare techniques to sail to Ebrohimi, transforming what they thought would be a routine military expedition into one of their most challenging and costly colonial operations in West Africa.

The British were forced to build up a strong naval and military force off the Benin River, which represented nearly all of the British naval strength in West Africa and the most significant assembly of British forces in the Niger Delta up to that point.

This caused the British to dispatch four warships, the HMS Alecto, HMS Phoebe, HMS Philomel, and HMS Widgem, to assault and destroy all of the villages surrounding Ebrohimi.

Nonetheless, Nana Olomu refused to submit or accept British entreaties to come to the Consulate for a talk, citing what occurred to Jaja when he acceded to such a request.

As a result, all attempts to conquer Ebrohimi by climbing up the creek failed, and Nana successfully resisted the British forces three times, forcing them to withdraw with ‘severe’ casualties.

It should be recalled that around two and a half years before Chief Nana’s assassination, the Urhobo Chiefs of Abraka, northeast of the Benin Consular district, signed a Treaty of Protection with Her Majesty’s Government, putting themselves and their people under British protection.

Not less than 14 similar Treaties had also been signed in the Urhobo country’s south and south-east under the Warri area. However, after Chief Nana’s death, treaty-making activity accelerated.

Nana Olomu died in 1916, ten years after returning from exile to regain his Itsekiri homeland, a fate that his Opobo counterpart, JaJa, never witnessed.