King Jaja of Opobo: The Nigerian Slave Boy Who became a King 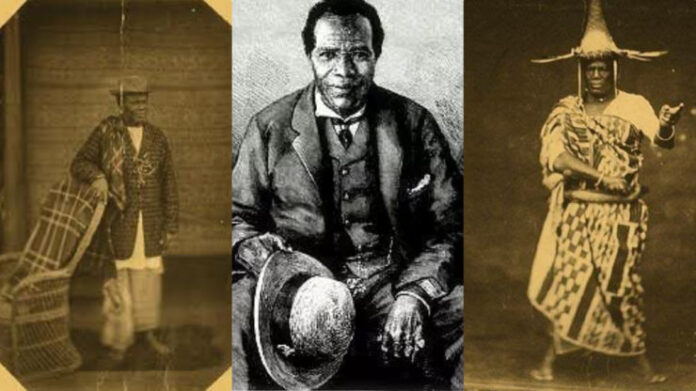 His true birth date is unknown, as are the identities of his true parents.

In the 1800s, Europeans invaded Igboland in search of slaves in return for firearms, tobacco, and ammunition, and black slave raiders raided various locations and sold Igbos as slaves.

In exchange for palm oil, the Niger Delta villages functioned as middlemen into the interior marketplaces for the trade items of European supercargoes stationed on the coast.

After being kidnapped and transferred to Bonny Island in Rivers state, his first master called him Jubo Jubogha, and he was then resold to Chief Alali, the head of the Opobu Manila Group of Houses.

It was during this period that the British, who couldn’t pronounce his name correctly, gave him the moniker “Jaja” for which he is popularly known today.

He paddled in his owner’s commercial canoes, traveling to and from the inland markets. Jaja demonstrated great entrepreneurial abilities at a young age, which did not go unnoticed as he captured the hearts of both the locals and the Europeans.

He worked his way out of slavery, was acculturated according to Ijaw (Ibani) customs, and ultimately became the leader of the Anna Pepple House.

Anna Pepple generally dominated other Bonny trade businesses. He developed his operations in the countryside and increased his European contacts. A continuing battle with the Manilla Pepple House, led by Oko Jumbo, pushed Jaja to rebel in 1869.

This made him find a new settlement, Opobo, where he was crowned King Jaja of Opobo.

Opobo, like the other city-states, prospered in the slave trade from the 15th through the 18th centuries.

This successful business was enough to make one wealthy as well as popular. The abolition of the slave trade in 1807, however, was substituted by the trade in palm oil. Palm oil was so popular that the region was dubbed the Oil Rivers area.

Opobo quickly dominated the region’s rich palm oil commerce, becoming home to fourteen of Bonny’s eighteen trade houses. Part of this success might be due to Jaja’s efforts to obstruct British merchants’ access to the interior, thus giving him a monopoly.

Also read: Queen Abla Pokou of Baoule Tribe, The Ivorian Princess who Sacrificed her only Son for her People.

During that period, King Jaja of Opobo even supplied palm oil directly to Liverpool, bypassing British middlemen. This was how lucrative the oil business was back then.

Apart from being a wealthy businessman and a skilled diplomat, he was also a man of honor and power. This was demonstrated in 1871 when he supported Queen Victoria in a battle on the Gold Coast (the Ashanti war) and was granted a sword of honor by Queen Victoria.

As the palm oil trade increased in Opobo, European ambitions to dominate the market grew, resulting in a battle between Jaja and British business tycoons, one of whom was John Holt of Liverpool.

While Jaja resisted Holt’s attempts to enter Jaja’s market in Qua Ibo River, Liverpool members of the African Association were calling for harsh action against Jaja for what they called “falling profit rates.”

In the name of “national interest,” King Jaja of Opobo struck the Qua Ibo people hard in 1881. He raided approximately seven of their towns, captured many, and murdered approximately 100 individuals for participating in direct trade with Europeans.

Even when the British devised various methods and regulations to outrun Jaja in his pursuit of control of the Oil region, he consistently outsmarted them, infuriating the British even more.

The other European powers, however, declared Opobo as British territory at the 1884 Berlin Conference, and the British quickly proceeded to take it.

King Jaja of Opobo only signed the treaty after the controversial provision was removed, and Consul Hewett had given him written assurances that Queen Victoria would not take his country or markets.

He faced tremendous opposition from Jaja and his chiefs over a clause requiring unrestricted commerce and mobility for British traders.

Johnson sailed a “Warship” dubbed HMS Goshawk to Opobo in September 1887 and invited Jaja on board.

He promised Jaja that nothing bad would happen to him. Johnson gave him two awful options when he first arrived on board.

The first was that if he refused to allow the Europeans entry, he would suffer instant bombardment from the British fleet, and the second was that he would go into exile.

Because Jaja was a man of great morals and principles, the British detained and tried him in Accra, Gold Coast (now Ghana), and then transported him to London for a while, where he met Queen Victoria and was her guest in Buckingham Palace.

Nobody knew what happened between him and the Queen, but he was eventually banished to the West Indies. His stay in exile in the Caribbean was said to have caused massive civil disturbance among the people of Barbados.

King Jaja of Opobo fights for his freedom

After years of fighting for his release, King Jaja of Opobo was relocated to the island of So Vicente, Cape Verde, off the coast of West Africa, to prevent a rebellion.

Jaja was eventually freed after years of struggling against his kidnapping, and the Parliament agreed that he could be returned to his Kingdom State of Opobo. Jaja, now in his forties, wished to return to his beloved Opobo region.

Barbadians, largely of African (Nigeria) heritage, had heard stories that an African King had been abducted and was on his way to the island.

They all banded together to give him an appropriate welcome. It was a fascinating episode in his life in Barbados. The British hauled him to the island and planned to try him for his “crimes.”

The people of the island were offended that an African King had been treated to such mockery and dishonor.

The residents of the island hurried and camped along the water’s edge to prevent the British from transporting Jaja to the Colonial court building, which was in the harbor.

They practically camped on the river bank all night.

The next day, a Sunday, the Islanders had their church service on the river bank, directly next to the ship.

King Jaja of Opobo was seen gazing through as the service continues. Before the service was over, he walked out, and the women greeted him with a great shout, hailing him as a King from their ancestral motherland.

Fearing that they would plot an escape for him, the British gathered their belongings and sailed back to St. Vincent.

He was taken from one location to another throughout the West Indies so that his family ancestry could be traced in St. Vincent (Saint Vincent and the Grenadines).

Some historians state that he got married and had children during this period.

“Jaja” is a frequent slang term in the West Indies (Barbados and St. Vincent) for someone who is haughty and carries himself or herself with pride and dignity. It was named after the way King Jaja held his head high when on the island.

Jaja was granted permission to return to Opobo in 1891, but he died en route, apparently poisoned by a cup of tea in June.

Instead, his body was transported to Tenerife in the Canary Islands, where he was cremated. Following his exile and death, the Opobo state’s strength swiftly dwindled; the area was plagued by slave raids and uprisings, and the British plundered the land’s natural riches.

After years of clamor and protest, his body was unearthed and returned to his beloved Opobo Kingdom, where he was laid to rest.

His ashes are presently housed in a hallowed (grave) shrine behind the Amanyanabo of Opobo Palace.

An enormous statue of King Jaja of Opobo stands in the center of kingdom with the inscription: A king in title and deed. Always just and generous.

King Jaja of Opobo rose to become the Delta region’s most successful merchant and king. His journey from slave to great monarch influenced both slaves and rulers.

Many people want to be like King Jaja of Opobo, to trade with him, and to compete with him. Jaja was acknowledged by the British Consul in Lagos since he controlled the hinterland market.

“There can be no doubt Jaja was the most powerful potentate the Oil Rivers ever produced. He was just as shrewd and foreseeing as he was powerful…He could be stern, and he was strict, but he was always just, and the form of government he set up was as near perfect as anything of its kind could be. Every man had the right of appeal, and, though in effect his own authority was never questioned, he conformed to his own rules, and governed through his council of chiefs“

Today, King Jaja of Opobo is regarded as one of colonialism’s true heroes. Opobo residents continue to memorialize him by hosting various cultural events in his honor.

Nigerian filmmakers Charles Okpaleke and Ramsey Nouah recently revealed that they have purchased the rights to make a film about Jaja’s life. This film hopes to tell the true narrative of Jaja’s journey from slave to a monarch.

Disclaimer: Original content doesn’t belong to us. Sources are listed below