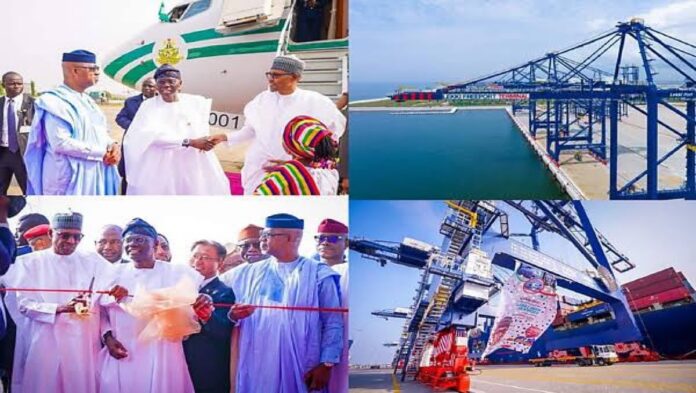 Yesterday, Nigeria’s President Muhammadu Buhari performed the historic opening of the Lekki Deep Seaport in Itoke Village, Ibeju-Lekki, Lagos State, and observed the first unloading of the CMA CGM Mozart at the Quay.

The project, an investment of over US$1.5 billion, is a joint venture between the Federal Government through the Nigerian Port Authority (NPA), the Lagos State Government, the Tolarams Group (owners of Lagos Free Zone) and Porto since China Technical Company.

Sambo pointed out that the inauguration of the project was possible because of the agility with which the President responded to all inquiries from the Federal Department of Transport regarding the Lekki Seaport.

Minister stated: “The fact that the Memorandum of Understanding between Lekki Deep Seaport supporters and its financial partners was signed in April 2019 and the large-scale Impact project is already operational in January 2023 is a testament to the tenacity of the goals of the Federal Ministry of Transport through the Port Authority of Nigeria.”

Sambo described the project as one of the Bukhari government’s greatest legacies, adding that more than 170,000 jobs will be created once operations begin.

In the goodwill message, Jianchun said the historic gate project, built jointly by five parties from four countries, is an apt example of a good business model.

The Chinese Ambassador to Nigeria stated, “This project is a joint venture between China, Nigeria and Singapore and is operated by a French company. The ‘five parties from four countries’ model is a way of harnessing the wisdom and strength of all parties.”

He promised that China will promote the business model to achieve win-win outcome, especially by supporting Nigeria’s growth, development and progress.

He added: “There is no need to worry about the government having any collateral or debt risks. It also shows that the investment climate in Nigeria is credible. We have every reason to be confident in Nigeria’s future development.”

Nigeria Export Processing Zones Authority (NEPZA) Director-General Professor Adesoji Adesugba noted that when construction of the port began in June 2020, Mr. President’s flag, very few Nigerians believed this would become a reality, especially in light of the of the challenges of COVID 19 that plagued the country and the world at the time.