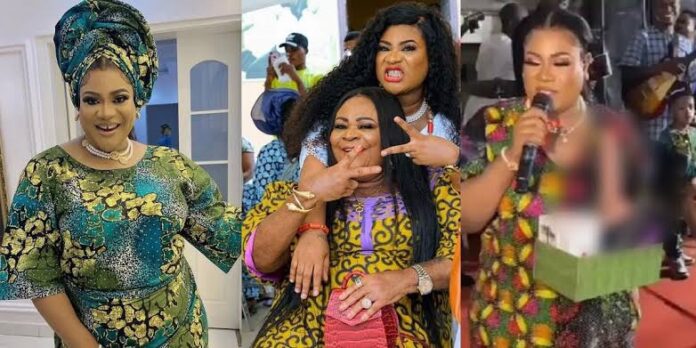 “I’m not trying to say men are scum because I have a man, but sometimes you have to help yourself when you don’t have a man, this is my reminder to the single women here to help each other,” Blessing announced at the now controversial event.

The act has since sparked an uproar on social media, with many condemning and criticizing the actress for choosing not to respect her late mother.

“Shame on you Nkechi for trying to disrespect your mother’s 1-year memory with this display of shame, so much disrespect,” wrote one Makinde.

“That’s why no man takes you seriously, you have no self-respect,” wrote one Aina.

“What is this? How can you disrespect your mother’s memory like that, all in the name of influence, is she sane? please someone take a look at her,” wrote one Sunday.

Speaking at the first anniversary of her mother’s death which also coincides with her posthumous birthday, Nkechi Blessing dismissed reports that she has a “politician or sugar daddy” funding her and claimed that, unlike public reports, she worked hard for her money and is not in any way indebted to anyone for her wealth.

“Even though I grew up in a pub I thrived, bar girls are supposed to be bad… anyone who knows me and is close to me knows I’m the best person to have by their side… God punish any politician who says they sponsor me everything I do having is my job… I may not be a billionaire yet but I’m very comfortable and I don’t beg for food, my mother is the sweetest woman I know and I will remember her until die,” she said.