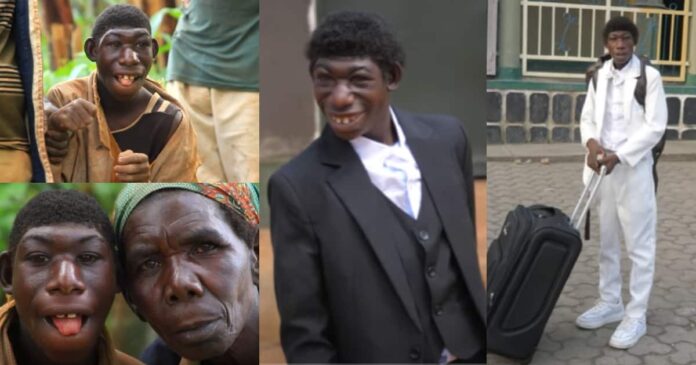 Nine months ago, Nsanzimana Elie and his mother were among the saddest people on earth. The society had depressed them making their life unbearable. For close to 21 years, Elie was forced to live in the forest, feed on grass and hide from the people.

The community in southern province of Rwanda where Elie was born did not want to associate with him as they considered him disabled. They would ridicule him and call him a monkey forcing him to flee into the forest. Narrating the sad story his troubled mother noted, “Elie is my sixth child. His five children have all died. After the death of his elders we were desperate. We prayed to God to get another kid and fortunately, we were blessed with Elie. He was very small with a small head. This worried the doctors and we could not believe he would grow. We were afraid that he would die like all his previous kids. Now I cherish him as heaven’s gift from God and love him enormously”.

Elie had never stepped into a school nor interacted with other children of his age. His mother claimed that he would even run away from her as he thought she would harm him. Medical reports indicate that Elie suffers from a condition known as microcephaly which results in a baby’s head being significantly smaller than expected.

Explaining why she didn’t enroll her son in school, Elie’s mom noted, “My 21-year-old boy did not go to school because experts told me that this boy cannot manage to attend a class. They examined the boy and told me that he lacks knowledge. He has the knowledge to survive but not that of making him a student.”

Elie’s breakthrough came after Afrimax television narrated his ordeal nine months ago. Different institutions have since come forward to help him.  A video shared on YouTube revealed that Elie has been enrolled into Ubumwe Community Center in Gisenyi Rwanda where he will get to acquire some basic human skills.

Nsanzimana Elie now swings in suits and the well-wishers have promised to build his mother a new house.