On Sunday, Oct. 24, in West Oakland at the intersection of Mandela Parkway and Huey P. Newton Way; an assemblage of Black Panther members, family, and neighbors (mixed group but predominantly Black) gathered in the rain to share remembrances and stories at the statue unveiling, a culmination of events in Oakland celebrating the Black Panther Party’s 55th anniversary.

With rain pouring down, a large crowd gathered between Dr. Huey P. Newton Way and Mandela Parkway Sunday afternoon to see the unveiling of a statue honoring the life of divisive civil rights leader Dr. Huey P. Newton. The bust, a detailed bronze torso that sits atop a large granite stone; was placed near where Heuy P. Newton was murdered in 1989.

The debuting of the piece was monumental in another way, too: It became the first permanent art display to honor the Black Panther Party in Oakland.

In preparation for Sunday’s installation of a bust of Dr. Huey P. Newton by Dr. Huey P. Newton Foundation and the City of @Oakland, Civicorps helped with planting & beautifying the median at 9th & Mandela Parkway. #LocalCorpsPride#LocalCorpsStrengthpic.twitter.com/w8TvAAzeDL

“I’ve created him to bring him home to West Oakland,” said news anchor-turned-artist Dana King, who sculpted the bust, to ABC7. King’s studio is just a few blocks away from where the monument was installed, so the project has particular importance to her — especially around helping to create a dialogue dispelling falsehoods about the Black Panthers.

“There’s been so much misinformation, propaganda about the Panthers that is harmful,” she said to the news outlet, noting that the bust showing Newton looking upward is meant to symbolize his “visionary” influence and ability to see into a more inclusive future. “The story that exists about the Panthers is wrong.”

Fredrika Newton, Dr. Huey P. Newton’s widow and President and Co-founder of the Dr. Huey P. Newton Foundation; was also in attendance Sunday afternoon, describing how the bust “glowed, just like him” to the crowd, according to KQED. 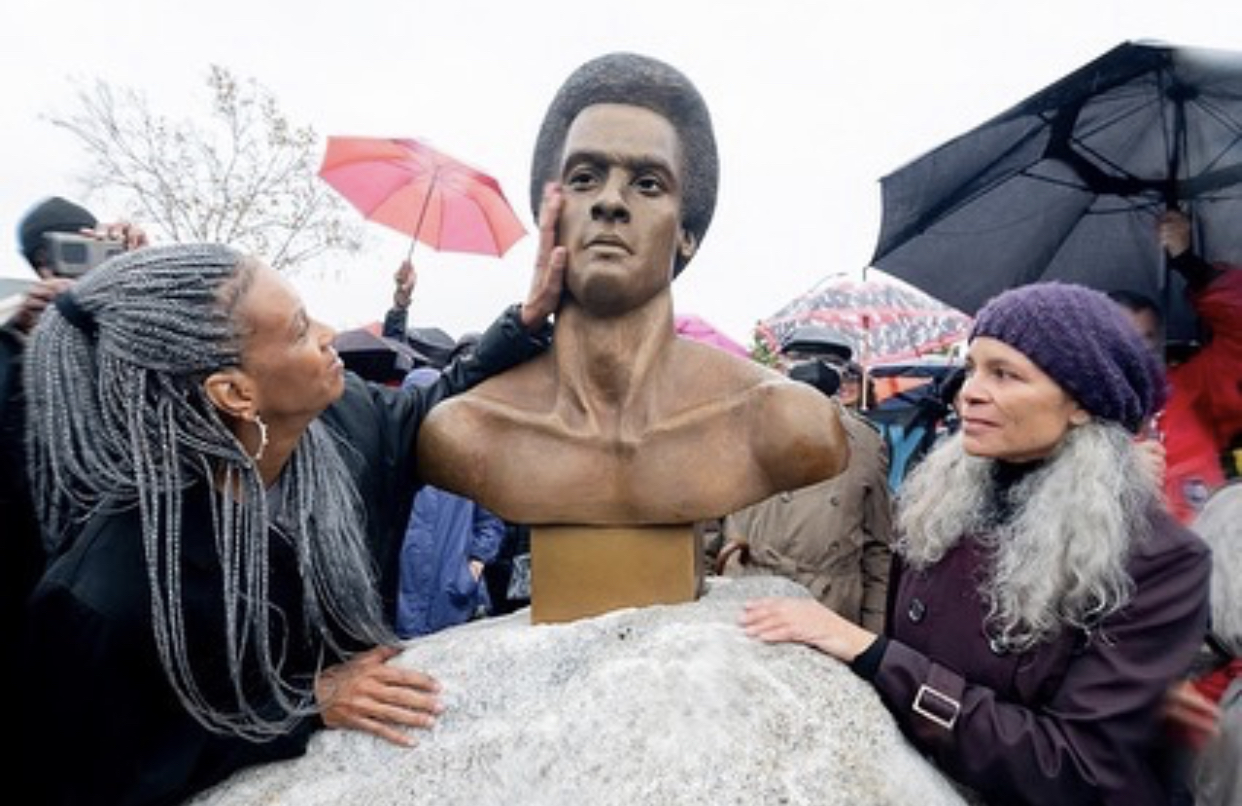 “His skin just glistened,” Newton added. Melvin Newton, the older brother of Dr. Hey P. Newton, was also present; noting that his brother was the only man he knew who was “truly free”  — having been known to carry himself; “ram-rod straight” and unbothered by outside opinion.

The Black Panther Party — which was once described by then-acting FBI Director J. Edgar Hoover in 1969 as “the greatest threat to the internal security of the country”; began in Oakland as a grassroots effort. Before the political party officially folded in 1982, it was credited with helping pave the way for the modern-day civil rights movement, as well as supporting a generation of Black activists, like Angela Davis and Kathleen Cleaver. Glimpses into the party’s impact still live on through nonprofit work; the Dr. Huey P. Newton Foundation, for example, creates public exhibits and monuments dedicated to the Black Panther Party.