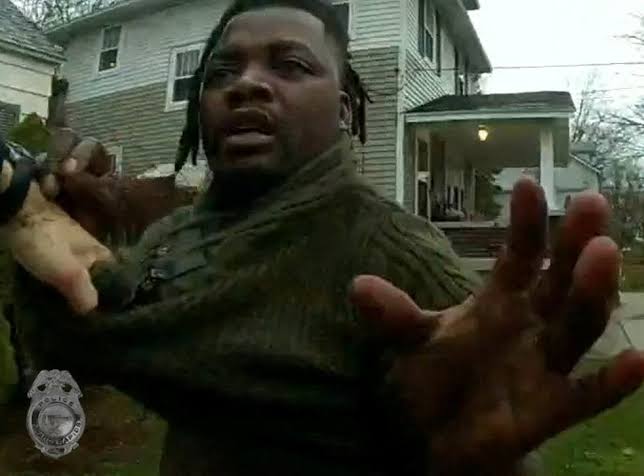 Patrick Lyoya, a 26-year-old Congolese refugee who is black, was killed in a Grand Rapids neighborhood during a routine traffic stop after he struggled with the officer over a stun gun.

According to mlive.com, the fatal April 4 incident occurred after Patrick Lyoya was pulled over by a Grand Rapids police officer.

Authorities said the license plates on the vehicle weren’t registered to it, adding that a fight later ensued before an officer fatally shot Lyoya.

Lyoya, who was driving with a front seat passenger on April 4, was pulled over after the officer ran the car’s license plate and discovered it did not match the vehicle.

He exited the vehicle, and the officer sought to detain him.

A short foot chase followed and ended on the lawn of a home where Lyoya attempted to block the officer from using his Taser, video footage shows.

The two had fallen to the ground when the officer drew his firearm and fired one shot in the back of his head.

On April 9, Lyoya’s family and hundreds of sympathizers held a march calling for justice for his death.

They also asked authorities to release bodycam and dashcam footage of the fatal encounter.

The grieving father and his interpreter said Lyoya was lying face down when the officer fatally shot him in the back of the head.

Though the officer has not been publicly identified, the protests remained peaceful as demonstrators chanted and waved signs.

The protests came as the family of Lyoya demanded that authorities dismiss the officer from the force and file criminal charges against him.

“They ask: where is our brother? They haven’t even seen the body and they can’t believe their brother has been killed. ”

“You cannot bring Patrick back,” a friend of Lyoya’s, Lyon, told Fox News. “But we heard what his family wanted.” “They want to see the officer that killed Patrick get charged,” he said.

“He didn’t deserve to die”

One protester told Fox News, “He didn’t deserve to die, and that’s just the end of the story.”

Another similarly said: “Patrick did not deserve to die. That was an execution. Arrest that cop, convict that killer. ”

Barwan, who described Lyoya as his brother and a superhero, pleaded for people to continue speaking out for his family member.

The death of a black man in Michigan after a traffic stop raises questions about police use of force.

Patrick Lyoya’s death sheds light on the painful irony of black migrants fleeing violence in their home countries only to encounter it in the U.S.

Patrick Lyoya’s parents said they had fled war in the Democratic Republic of Congo only to have their “son killed with bullets” in the United States.

At an emotional press conference, attorney Ben Crump blasted what he called an “unnecessary, unjustifiable, excessive use of fatal force” that saw the officer “escalate a minor traffic stop into a deadly execution.”

“There was nothing, he said,” to justify him reaching for his service revolver, taking it and putting it to the back of Patrick’s head and pulling the trigger blowing his head off. ”

Lyoya’s family lawyers want the officer who opened fire identified, prosecuted, and fired from the police.

For now, he has been placed on paid leave pending the state investigation.

The Congolese Prime minister, Jean-Michel Sama Lukonde, condemned what he called “a cowardly assassination” and demanded an investigation.

In an interview, Bryce Huffman said that in Grand Rapids, in 2017, a traffic study was done that found that black motorists were twice as likely to get pulled over as white motorists, even though, at the time, the black population was only about 14 percent of the city’s population of around 200,000 residents.

And these sorts of events, where unarmed children were being mistreated by the police, occurred multiple times in a row.

And the police department, they had outside consulting firms come in to try to help them remediate that problem.

But as we can obviously see from what happened to Patrick, those efforts were not enough.