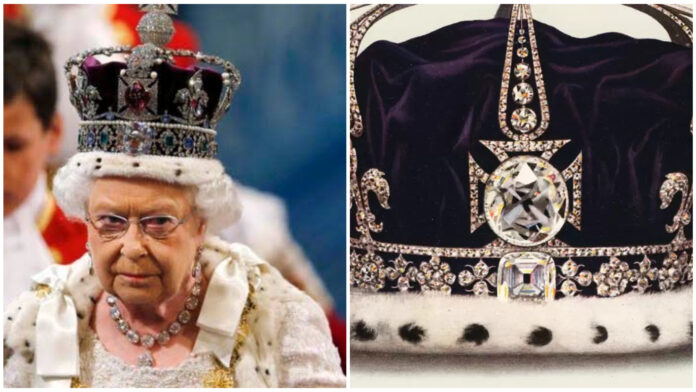 People in Africa and India have asked for some crown jewels to be returned after the death of Queen Elizabeth II.

The Crown Jewels include a collection of some of the rarest and most expensive gemstones in the world.

Two of the gems are India’s Koh-i-noor diamond and Africa’s Great Star, each valued at around $400 million. The acquisition of these diamonds is controversial given the history of British colonialism.

Now, the royal family has been asked to accept the Queen’s death as an opportunity to return the jewels.

“Can India recover the Kohinoor Diamond/everything in the British Museum that was stolen?” wrote one person on Twitter.

The death of Queen Elizabeth II unleashed a wave of grief and misery across Britain. While condolences continue to flow to the monarch’s family, the news has also led to growing calls for the return of the Queen’s crown jewels.

A Twitter thread from one account called for the return of the Great Star of Africa. The tweet focused on the Cullinan diamond, the largest rough diamond in the world, mined in South Africa in 1905 and was thereafter presented to Edward VII.

Later, the diamond was cut into several smaller ones, the largest of which was called the Great Star of Africa. The diamond in question is part of the queen’s scepter. The thread called for the diamond to be returned, claiming it was stolen by Britain.

In addition, several users also requested the return of the Kohinoor diamond, installed on the queen’s crown, noting that the diamond will supposedly go to Queen Consort Camilla.

The Kohinoor diamond was mined in India in the 14th century. The priceless gem changed hands several times over the centuries before ending up in the British Empire.

The Kohinoor was presented to Queen Victoria by British officials after the conquest of Punjab in 1849. It was later installed in the British Crown, which was created in 1937 for the coronation of King George VI.

There have been several calls over the years for the UK to return the jewel, which is also at the center of an ownership dispute between at least four countries, including India.