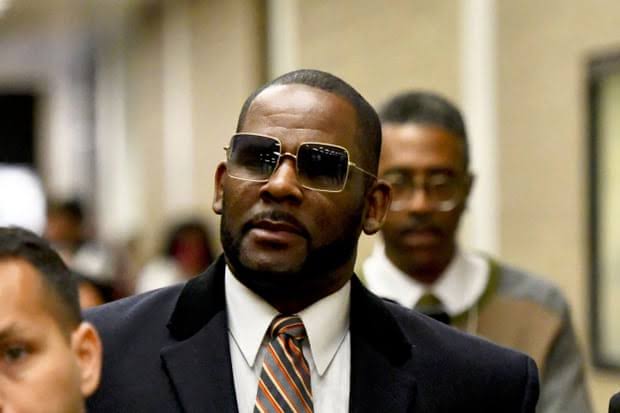 Singer R. Kelly was convicted on Wednesday on multiple child pornography charges, alleging he recorded the sexual abuse of his 14-year-old goddaughter nearly 20 years ago.

However, the jury acquitted him of the charges he shared with two associates who conspired to cover up the tapes and obstruct justice in his 2008 child pornography trial in Cook County.

Co-defendants Derrell McDavid and Milton “June” Brown were acquitted of all charges. The jury deliberated for about 11 hours over two days before returning its verdict.

Kelly was convicted on three of the four counts alleging that he produced child pornography by filming himself having sex with his underage goddaughter, who testified against him under the alias “Jane”. The jury saw parts of these three videos in court.

The jury acquitted Kelly and McDavid, his former business manager, of a conspiracy to obstruct justice in which they were accused of tampering with his 2008 Cook County child pornography trial by covering up incriminating sex tapes while Jane and her parents were bullied and paid to keep her abuse a secret.

Kelly, McDavid and Brown were also acquitted of a conspiracy to obtain a child pornography charge, alleging they tried to recover and cover up three sex tapes with Jane.

Kelly and McDavid were also cleared of two counts of receiving child pornography which included further allegations that they attempted to access and cover up other videos with Jane.

The government’s case on these charges was based largely on testimony from Charles Freeman and Lisa Van Allen, who defense attorneys called liars in an attempt to extort money from Kelly.

Eventually, Kelly was convicted on three of the five counts, alleging that he had seduced a minor into sexual activity, but was acquitted of two other charges.

Jane accused Kelly of sexually abusing her hundreds of times after becoming her godfather when she was just 14 years old.

Prosecutors showed the jury three videos that they said showed Kelly having sex with Jane, including one showing him telling her to lie on the floor while urinating on her.