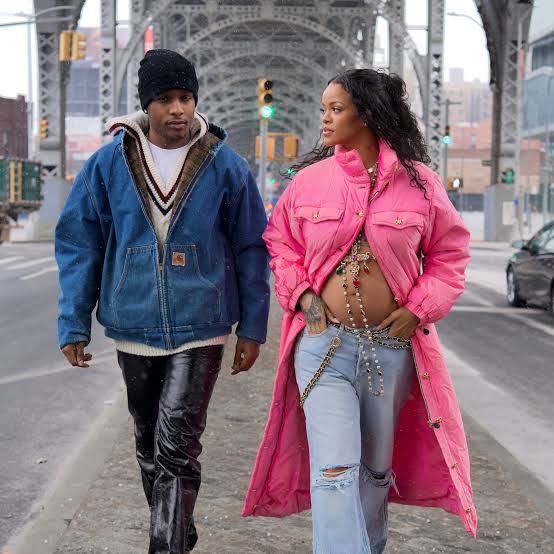 Rihanna candidly discussed her pregnancy, revealing it wasn’t quite planned with her boyfriend and the baby’s father, A$AP Rocky, who went from her friend to her partner.

In her words, she said, “People don’t get out of the friend zone very easily with me.”

“And I certainly took a while to get over how much I know him and how much he knows me because we also know how much trouble we can land each other in.”

Rihanna credited quarantining together with helping really build their relationship. “He became my family at that time,” she said.

She revealed to the magazine that the couple took a road trip in the summer of 2020 from Los Angeles to New York on a big tour bus.

At every stop, they had fun. “I love the simple things but also the grand adventures,” she said. With Rocky, “There’s no pretentious my-brand-your-brand bullshit, it’s just us living. I just feel like I can do any part of life by his side. “

What she loves about their relationship

Rihanna told Vogue what she loved about them: “Transparency with everything: how we’re feeling, what our goals are, what our fears and insecurities are.” The vulnerability of being able to say what you feel about each other. “

She said having a baby just happened for them when asked if it was a planned pregnancy.

“Planning? I wouldn’t say planning. But certainly not planning against it, “she said. I don’t know when I ovulate or any of that type of sh*t. We just had fun. And then it was just there on the test. I didn’t waste any time. I called him inside and showed him. Then I was in the doctor’s office the next morning, and our journey began”.

Rihanna said when it came to her baby’s gender, she didn’t want a reveal party. “When we’re ready to tell the world, we’ll just tell them,” she said.

During her pregnancy, Rihanna feels as bold as ever. “I think I even say yes more now because I know it will be different on the other side of this,” she said.

“I expected some sort of magical transformation at first, but I’m still the same person. None of the dials are turned down. “

And with her baby, Rihanna knows “they’re going to teach me more than I could ever teach them.”

“And I want them to go for it. I want to see who they are in the world, who they become.”

“Because I’m just here to keep them on the rails—a passenger as much as a driver. “