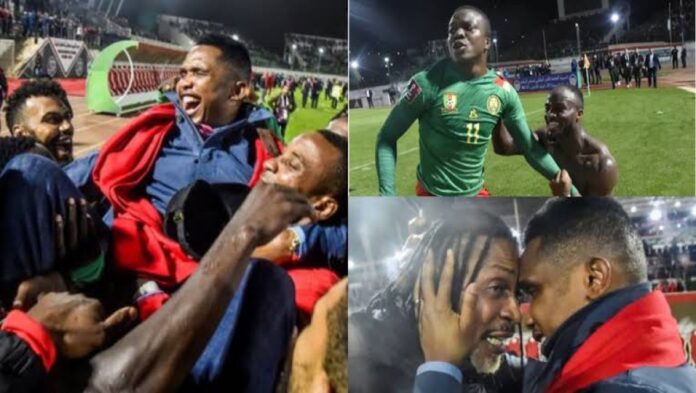 Fecafoot president Samuel Eto’o predicted that his country, Cameroon, would win the 2022 World Cup after defeating Morocco in the final.

The four-time African Player of the Year believes the Indomitable Lions will become the first African nation to lift the trophy after defeating the Atlas Lions in the final scheduled for December 18 at Lusail Stadium.

“Africa has always had the potential to host major World Cup finals, but we haven’t always shown our best face,” Eto’o said in a statement.

“Over the years, African teams have gained more and more experience and I believe they are ready not only to participate in the World Cup, but also to win this competition.”

“It would be a dream come true. For every player, winning trophies is the ultimate goal. As president of our federation, I would love to see Cameroon win the World Cup.”

However, Eto’o predicted that the five representatives from Africa, Cameroon, Morocco, Ghana, Tunisia and Senegal, would advance to the knockout stage with the Indomitable Lions, Atlas Lions and Teranga Lions.

The former Barcelona, Inter Milan and Chelsea striker paved the way for Cameroon and Morocco to reach the final. He expected Morocco to qualify for the final after beating Spain (in the round of 16), Portugal (in the quarterfinals) and champions France (in the semifinals).

For Cameroon, the expected path to the final is through victories over Belgium (in the quarterfinals) and African champions Senegal (semifinals).

Eto’o is also optimistic about the chances of hosts Qatar, who he believes will surprise England by defeating England in the round of 16.

“We’ve already seen the work that Qatar has done in recent years and how the team has matured,” he said. “The other teams have no doubts about the quality of the national team and I think they could come as a surprise.”

Cameroon, Morocco, Tunisia, and Senegal are expected to name their squads for the World Cup after Ghana revealed its provisional squad last week.