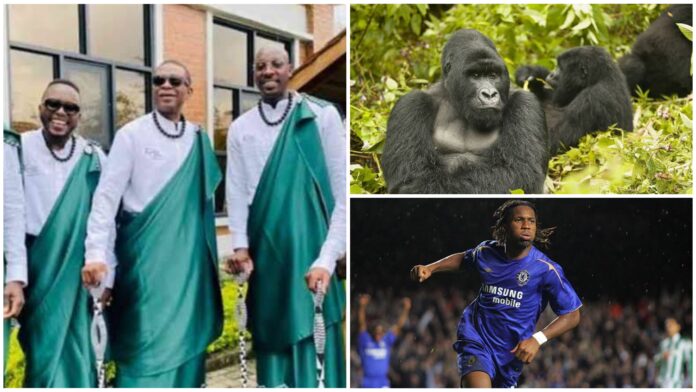 Kenyan boy band, Sauti Sol were among the guests for the 18th edition of Kwita Izina, a naming ceremony for the baby Rwandan gorillas.

Held in Kinigi, at the foothills of Volcanoes National Park, this year’s event was attended by captains of industry, philanthropists, sports and music icons and leading conservationists.

Sauti Sol announced that they have named a new family of mountain gorillas ‘Kwisanga’, which means ‘feel at home’ in Kinyarwanda.

Heir to the British throne Charles, Prince of Wales, also had the privilege of naming a baby male gorilla.

Also, read; List of Winners At The 2022 Headies Award As Next Rated Category Winner Gets a Bentley

He named the baby Ubwuzuzanye, which means harmony in Kinyarwanda, a name chosen to make humanity aware that humanity must unite to protect the environment and achieve sustainable development.

On social media, members of the Sauti Sol band expressed their gratitude for having the privilege of being the first to name an entire family of gorillas.”

“What a great day and night, courtesy of @rdb_rw and @visitrwanda. We had the great honor of being the first to name an entire family of gorillas during the 18th Kwita Inzina ceremony. Along with some of our idols @didierdrogba @gilbertosilva @jpsorin6, we couldn’t be happier to be a part of history.”

“We chose the name Kwisanga, which means feeling at home. This name is given to the newest gorilla family in Rwanda to celebrate the peaceful division of the Kwitonda group, which left the two groups evenly divided.”

The musical group explained that the tradition of naming Gorillas is an old one that allows groups and families to meet and interact with members of other families, groups, or communities.