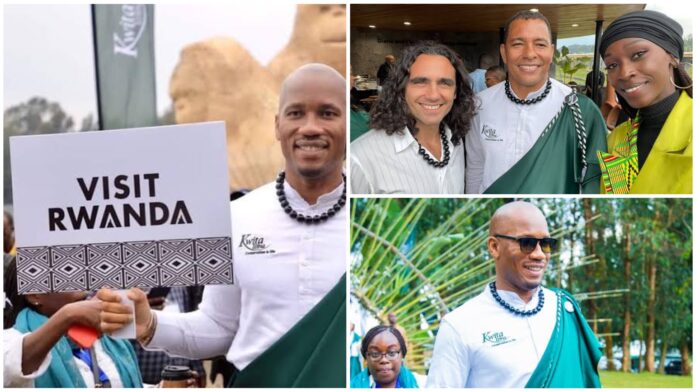 Didier Drogba was among the featured guests who named 20 baby gorillas at the 18th edition of Kwita Izina in Musanze, a tradition well known in Rwanda.

Also in attendance was former Brazil and Arsenal defensive midfielder Gilberto Silva, who along with other football legends named baby gorillas while promoting ‘Visit Rwanda’.

The culture of naming Baby gorillas, introduced in 2005, was attended by many dignitaries on September 2. The legends join other football legends from a number of clubs who have given their preferred names to young mountain gorillas over the past four years, according to the organizers of Visit Rwanda’s partnership agreements with clubs based in Europe.

Didier Drogba was instrumental in helping Chelsea win their first Champions League trophy a decade ago when they drew level against Bayern Munich before converting the crucial penalty.

Gilberto Silva was Chosen among the people to name the Primates due to Rwanda’s partnership with Arsenal, where he spent most of his playing career.

“Welcome to Rwanda @GilbertoSilva! The @Arsenal legend will tour the country as part of the #VisitRwanda x #Arsenal partnership and will name a baby mountain gorilla at this year’s @KwitaIzina gorilla naming ceremony in Kinigi.