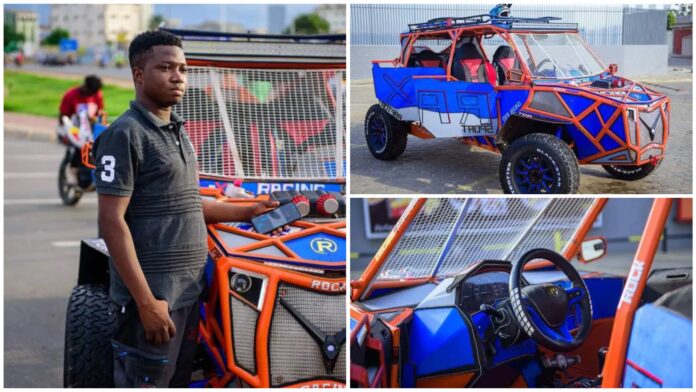 A young Togolese inventor is making waves with his homemade 4X4 car made mostly from recycled materials.

Sourou-Edjareyo Malazouwe, 25, is a self-taught sports car enthusiast. But since he couldn’t afford one himself, he decided his only option was to build one himself.

“In 2016 I finished high school and started my own business, selling and repairing cell phones and computers. Because of that, I could afford to build this car,” he said.

Work started in his workshop in the Forever district of the capital Lomé about a year ago, and the first model has been on the streets for some time. The young inventor dubbed the car the RAF-X Raptor, in homage to his own nickname, Raouf.

“I used a lot of recycled parts. I paid for some new ones. In this box you will see titanium bus parts, motorcycle parts, auto parts, it depends. I can get parts from anywhere, and that’s how I do it,” he says.

Malazouwe says many people are impressed with the car and he has received several requests for one but has not responded as he works to fix issues at his workshop.

Your next step after that will be to make another one.

Meanwhile he is the pride of Togo. In May he met the country’s Prime Minister, Victoire Tomégah-Dogbé Dogbé, who later tweeted that she was impressed and delighted by his genius.

“I told him how proud we are and reiterated the government’s commitment to supporting him,” she said, adding that her government is proud to help develop the enormous potential of Togo’s youth.