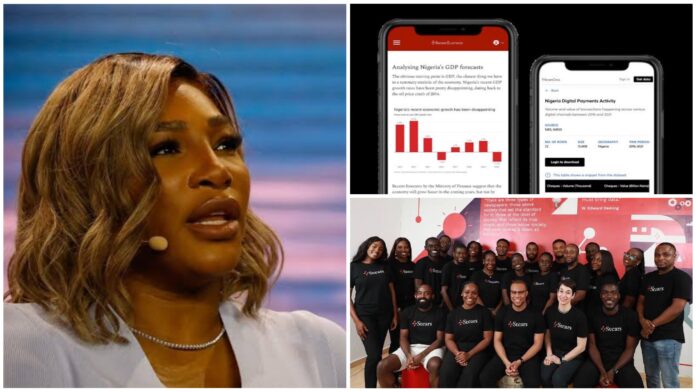 The investment is one of a few in Africa for Serena Ventures, whose founder announced she will focus more on investing after retiring from tennis following the US Open in September.

“One of the main reasons I invested in Stears is not just because of my love and appreciation for Africa, but because Stears has been thinking strategically about how to grow the investor community on the continent,” Williams said in an emailed statement. “They’re aware of the complexities and impacts of data and technology, and I really respect what they’re doing.”

Based in Lagos, Stears provides data collection, production, consulting and analysis services. Its products include Stears Insights, the company’s flagship digital product, which provides analytics-driven content to its subscribers.

Other participants in the round included Melo7 Tech Partners LLC, Cascador, Hoaq Club and return investor Luminate Fund from the Omidyar Group, according to co-founder and CEO Preston Ideh. Stears declined to provide rating information.

The company grew thanks to paid subscriptions, making it a rare subscription success story in Nigeria, where consumers are often not used to paying walls for information.

The Stears round comes in what marks an all-time record for funding African startups. Still, early-stage African companies tend to raise less than American ones, according to Bloomberg data. The average investment for African seed rounds this year is $2.6 million, compared to an average of $4.5 million.

Stears was launched in 2017 by four co-founders who met during high school at Loyola Jesuit College in Abuja, Nigeria, as well as at the London School of Economics and Imperial College in the UK.

The company plans to use the new funding to expand its coverage geographically, establishing a presence in eastern and southern Africa, Ideh said. In addition, Stears will expand its product range beyond data insights, deepen data partnerships and collect its own proprietary data that it will license access to, he said.