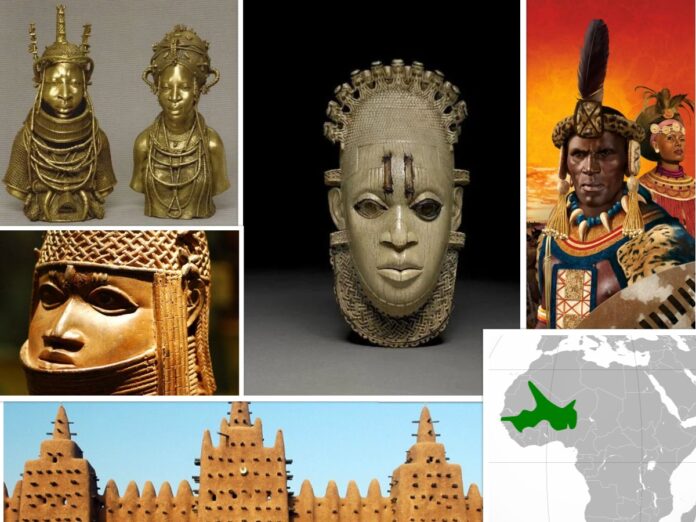 When you think of Africa and its civilization, your mind can easily take you to Iconic places like Ethiopia which has a history of never being colonized, the home of the famous Queen Sheba of whom the Jewish King Solomon married, or you may want to think of Egypt, the ancient land in Africa that is arguably known to be the home of a civilization in Africa.

The truth is that there are so many places in Africa that were exposed to ancient civilization just as much as Egypt was. This post shines more light on these other places as they are worthy of mention. The essence of this write-up is to share knowledge about 8 Interesting African civilizations besides Egypt.

The Kingdom of Aksum, also known as the Kingdom of Axum or the Aksumite Empire, was a kingdom centered in Northeast Africa and South Arabia from Classical antiquity to the Early Middle Ages. Based primarily in what is now northern Ethiopia, and spanning modern-day Eritrea, northern Djibouti, and eastern Sudan, it extended at its height into much of modern-day southern Arabia during the reign of King Kaleb. Besides influencing other superpowers in Africa, and dominating the coasts of the red sea until the seventh century this empire created Guerrez, (Africa’s only original written script) The Kingdom of Aksum was considered one of the ancient world’s four great powers of the 3rd century by Persian prophet Mani, alongside Persia, Rome, and China.

The Kingdom of Benin, also known as the Edo Kingdom, or the Benin Empire was a kingdom within what is now southwestern Nigeria. It has no historical relation to the modern republic of Benin, which was known as Dahomey from the 17th century until 1975. The Kingdom of Benin’s capital was Edo, now known as Benin City in Edo State, Nigeria. The Benin Kingdom was “one of the oldest and most developed states in the coastal hinterland of West Africa”. It grew out of the previous Edo Kingdom of Igodomigodo around the 11th century AD and lasted until it was annexed by the British Empire in 1897.

The Benin empire prospered well with its art, They made sculptures primarily made of cast bronze and carved ivory, Benin art was produced mainly for the court of the Oba of Benin – a divine ruler for whom the craftsmen produced a range of ceremonially significant objects.

The Ghana Empire, also known as Wagadou or Awkar, was a West African empire based in the modern-day southeast of Mauritania and western Mali that existed from c. 300 until c. 1100. The Empire was founded by the Soninke people, and was based in the capital city of Koumbi Saleh.

When Ghana’s ruling dynasty began remains uncertain among historians. The first identifiable mention of the imperial dynasty in written records was made by Muḥammad ibn Mūsā al-Khwārizmī in 830. Further information about the empire was provided by the accounts of Cordoban scholar Al-Bakri when he wrote about the region in the 11th century.

The empire began as a small Mandinka kingdom at the upper reaches of the Niger River, centered around the Manding.  During the 11th and 12th centuries, an empire began to develop following the decline of the Ghana Empire, or Wagadu, to the north. During this period, trade routes shifted southward to the savanna, stimulating the growth of states such as Bonoman. Sundiata Keita was a warrior prince of the Keita dynasty who was called upon to free the Mali people from the rule of the king of the Sosso Empire, Soumaoro Kanté. The conquest of Sosso in c. 1235 gave the Mali Empire access to the trans-Saharan trade routes.

Following the death of Sundiata Keita in c. 1255, the kings of Mali were referred to by the title Mansa. This brings us to mention Mansa Musa (Musa I of Mali) was the ruler of the kingdom of Mali from 1312 C.E. to 1337 C.E. During his reign, Mali was one of the richest kingdoms in Africa, and Mansa Musa was among the richest individuals in the world. The ancient kingdom of Mali spread across parts of modern-day Mali, Senegal, the Gambia, Guinea, Niger, Nigeria, Chad, Mauritania, and Burkina Faso. Mansa Musa developed cities like Timbuktu and Gao into important cultural centers. He also brought architects from the Middle East and across Africa to design new buildings for his cities. Mansa Musa turned the kingdom of Mali into a sophisticated center of learning in the Islamic world.

Kush was a kingdom in northern Africa in the region corresponding to modern-day Sudan. The larger region around Kush (later referred to as Nubia) was inhabited c. 8,000 BCE but the Kingdom of Kush rose much later. Sometimes the region was called the “Land of the Bow” because of its famous archers. One of the most famous leaders of Kush was Piye who conquered Egypt and became pharaoh of Egypt. Most of the people of Kush were farmers, their primary crops were wheat and barley.

The Kush civilization was known for its extensive trade routes that provided ivory and other luxury goods, conquering Egypt during the twenty-fifth dynasty, and having an active influence over Northern African culture. The first contact the Kush had with Egyptians came from trade.

The Songhai Empire was the largest and last of the three major pre-colonial empires to emerge in West Africa. From its capital at Gao on the Niger River, Songhai expanded in all directions until it stretched from the Atlantic Ocean (modern Senegal and the Gambia) to what is now Northwest Nigeria and central Niger. The slave trade was also important for the economic development of West Africa. For a very long time, West African kingdoms relied on slaves to carry out heavy work. The Songhai kingdom under the rule of Askia Mohammed used slaves as soldiers. Slaves were trusted not to overthrow their rulers. Slaves were also given important positions as royal advisers.

The Zulu Kingdom, sometimes referred to as the Zulu Empire or the Kingdom of Zululand, was a monarchy in Southern Africa that extended along the coast of the Indian Ocean from the Tugela River in the south to the Pongola River in the north. The kingdom grew to dominate much of what is today KwaZulu-Natal and Southern Africa. In 1879, the British Empire invaded, beginning the Anglo-Zulu War. After an initial Zulu victory at the Battle of Isandlwana in January, the British Army regrouped and defeated the Zulus in July during the Battle of Ulundi. The area was absorbed into the Colony of Natal and later became part of the Union of South Africa.

A name worthy of mention is Shaka. Shaka was the illegitimate son of Senzangakhona, Chief of the Zulus. He was born in c. 1787. He and his mother, Nandi, were exiled by Senzangakhona and found refuge with the Mthethwa. Shaka fought as a warrior under Jobe, and then under Jobe’s successor, Dingiswayo, leader of the Mthethwa Paramountcy. When Senzangakona died, Dingiswayo helped Shaka become king of the Zulu. After Dingiswayo’s death at the hands of Zwide, king of the Ndwandwe, around 1818, Shaka assumed leadership of the entire Mthethwa alliance.

Africa as we know it today is a large continent home to so many cultures and political states. But before the 21st century, there were practices and traditions that were in existence and have been successfully passed down. Before the various parts of Africa were colonized, there were systems in place, strong traditions being practiced, wars fought and civilizations established. The 8 mentioned above were some of the major ruling empires in the world that had their roots in Africa. Thank you for riding with me on this journey, Let me know your thoughts in the comment section.