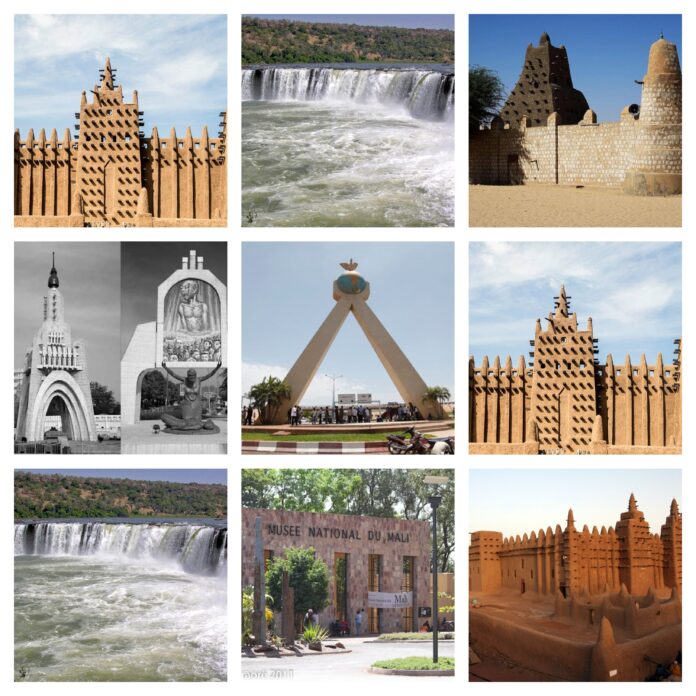 There is a country that holds the deepest secrets and treasures about Africa and Africans, and in recent times we have people rarely talking about that country. Ask a non-African about Africa and they might want to tell you about Egypt and Ethiopia as the countries with the deepest cultural heritage, many times Mali is rarely mentioned.

Mali, officially known as the Republic of Mali is the eighth largest country in Africa, with an area of over 480,000sq mi and a population of about 21.9 million people. In the past, Mali was a part of the three west African Empires that controlled industry and commerce in the 14th century. That period in time had the Songhai Empire, Ghana Empire, and Mali Empire at the top of agriculture, manufacturing, import, and export trade.

Speaking about Monuments in Mali, this post has 5 historic sites that stand as monumental experiences for those who ever have the opportunity to visit. Being a country of mixed cultures, various sites that symbolize the true identity of the people of Mali are in existence as a testimony to the tradition and lifestyle of the people.

Follow me as I take you through 5 historic sites in the Republic of Mail.

Timbuktu is an ancient city that gained prominence in the early 14th century during the reign of Mansa Musa who history has as one of the wealthiest persons that has ever lived. It is in records that Timbuktu at a certain time was home to the largest university in the world; Koranic Sankore University, which became the intellectual and spiritual center for the propagation of Islam throughout West Africa.

2. The National Museum of Bamako

3. The Great Mosque of Djenné

Djenn is known to be one of the oldest towns in West Africa, inhabited since 250 BC. It was an important center of the trans-Saharan gold trade and the spread of Islam. The Great Mosque of Djenné of situated in Djenné is the largest mud-brick edifice in the entire world, completed in 1906. Malians have given themselves the task to maintain the walls of the building after every rainy season. A weekly market day holds close to this monumental site and it is one of the liveliest markets in West Africa as Fabrics, food, and spices are sold there.

The gouina falls, popularly known as the “Niagara falls of Mali”. Between the towns of Bafoulabé and Diamou in the Kayes Region, where the river runs north from the Talari Gorges. The river is about 500 m wide and drops 16 m over the falls with its water falling on the step of Precambrian sandstone. It’s important to note that Mali is a country that enjoys both rainy seasons and dry seasons.

The tomb of Askia is located in Gao. It was built by the emperor of the Songhai empire in 1495 when Gao became the capital and Islam was adopted as the official religion.

Mali is a country that exists today as an Independent political state, located in the southwest of Algeria, extending southwest from the southern Sahara Desert through the Sahel to the Sudanian savanna zone.

To know about the beautiful festivals that happen in Tanzania, click the link below