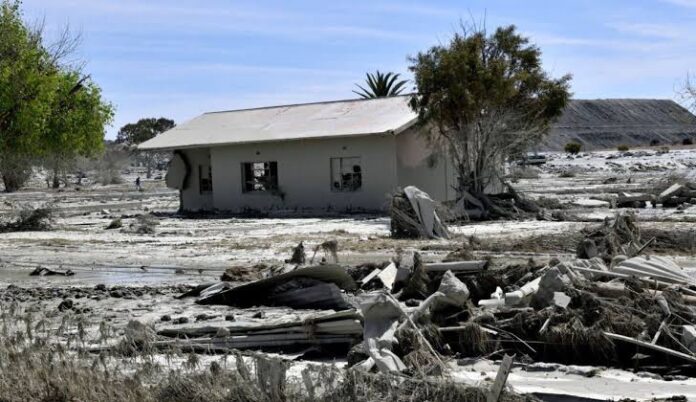 At least three people have been confirmed dead and several homes were swept away after a dam collapsed near an abandoned diamond mine in Jagersfontein, South Africa.

The tragedy, which occurred in the early hours of Sunday, also caused flooding in several properties. According to local reports, at least 300 people were affected in Charlesville, Jagersfontein.

South African authorities had earlier closed the Jagersfontein Diamond Tailings Dam in 2020 due to high water levels before allowing it to reopen last year, a company official said on Monday, a day after the dam collapsed that killed at least three people and injuring 40.

Mud water flowed from the tailings dam on Sunday morning, sweeping away homes and cars in Jagersfontein, in the Free State province, 514 kilometers southwest of Johannesburg.

Tailings dams – large landfills built to store mine waste – have caused several environmental disasters, most notably in Brazil in January 2019, when 270 people died after the collapse of Vale SA’s Brumadinho dam (VALE3.SA).

The government gave the green light to resume operations in June 2021 when water levels dropped, according to Jagersfontein Developments, a division of Dubai-based Stargems Group, which purchased the facility in April 2022.

Jagersfontein is reprocessing the tailings waste in hopes of finding diamonds that were lost in the initial mining, he added.

De Villiers said the cause of the dam collapse is not yet known and experts have been called in to investigate. Engineers last inspected the dam in July of this year and found that volumes were “within limits” and that the dam was safe, Jagersfontein Developments said in a statement.

The company said it has allocated 20 million rand ($1.17 million) to relief efforts.

The South African Broadcasting Corporation reported that a Jagersfontein resident this morning returned to where her home used to be before it was swept yesterday.

“Now it’s just a matter of accepting what happened and trying to see how we’re going to move forward, because at the moment we have nothing,” the news outlet said, citing the woman. “Now we’re back to see what we can salvage from the wreck and what help we can get.”