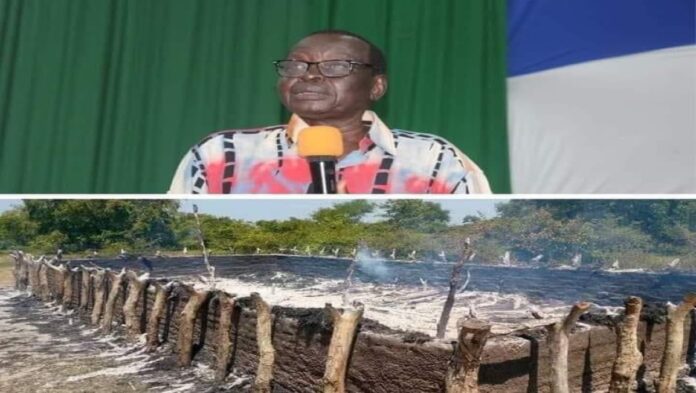 Former Deputy Home Secretary and member of the restored Transitional National Legislative Assembly of South Sudan, Gen. Salva Matok Gingdet, said he burned down a church in Gogrial East County, Warrap State, claiming it would “destroy our way of life”.

At a funeral in East Gogrial on Sunday, Mathuk accused Seventh-day Adventists of promoting immorality and burning traditional shrines that the people of Warrap State have witnessed since its inception.

“There is a church called Seventh Day Adventist. What are you doing here! I chased them last time and now they are back and destroying the traditional shrines and homes of our ancestors. This is our way of life,” the minister was quoted saying.

The leader of the Christian Adventist sect, also known as Seventh-day Adventists (SDA), in Bahr al-Ghazal, admitted to burning down traditional shrines in Gogrial County, east of Warrap, but said it was at the request of the congregation.

Christians, particularly Catholics, Anglicans and Presbyterians, make up about three-fifths of South Sudan’s population. Christianity is the result of European missionary work that began in the second half of the 19th century.

The rest of the population is a mixture of Muslims and followers of traditional religions, the latter in smaller numbers than the former.

Although believers in the traditional ways of life share some common elements of religious belief, each ethnic group has its indigenous religion. Almost all traditional African religions in South Sudan share the concept of an exalted spirit or deity, usually a creator deity.