Meet the South Sudanese Dinkas, the tallest people in Africa. 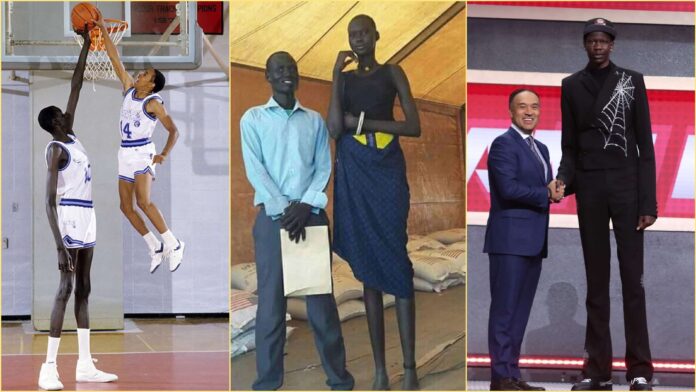 South Sudanese Dinkas are the tallest people in Africa.

Alongside the Tutsi of Rwanda, some of the tallest individuals in Africa, and probably the entire globe belongs to the Dinka tribe of South Sudan.

According to a recent poll done in the nation, the men of the Dinka ethnic group in South Sudan are on average nearly 6 feet tall, earning them the nickname “the land of giants” throughout the world.

Dinkas are a South Sudanese ethnic group that has a substantial diaspora abroad and they inhabit South Sudan’s savanna region near the central marshes of the Nile basin.

South Sudanese Dinkas are linked to the Nuer and speak a Nilotic language that belongs to the Nilo-Saharan language family’s Eastern Sudanic branch.

They are claimed to have come from the Gezira (modern-day Sudan), where the kingdom of Alodia, a Christian, multi-ethnic state predominated by Nubians, reigned.

They are one of the three tribes that made up the original settlers and the largest ethnic tribe in South Sudan.

The Dinka tribe grew throughout the area in the middle of the 1800s after defending their territory from the Ottoman Turks and fending off attempts to enslave them by slave traders who wanted to convert them to Islam.

The Dinka tribe made up around 18% of South Sudan’s 4.5 million inhabitants, according to the 2008 Sudan census.

Recent research, however, suggests that Dinka boys’ stature is declining, probably as a result of malnutrition and armed conflict.

According to some studies, Dinkas’ calorie-dense diet heavy on dairy products is a common cause.

The Dinka people are frequently referred to as “the tribe of basketball”. The majority of the population appears to be tall, thin, and dark-skinned.

Many tourists who visit them are captivated by them because of how unique and distinctive their physical characteristics have made them.

The majority of the Dinka’s livelihood is traditional agriculture and pastoralism, with a focus on raising cattle for milk and for cultural reasons.

Their religious rituals and beliefs are also a reflection of their pastoral lifestyle. Most people, especially those who live in villages, adore Nhialic, a single God who communicates through spirits that temporarily possess people in order to do so.

The Dinka believe that rather than a religious book, nature and their environment provide them with spiritual force.

Although there have been many theories on why the Dinka people are so tall, the most prevalent one is because milk and organic food make up the majority of their diet.

But since many other tribes that consume the same cuisine as the Dinkas don’t appear to be as tall, one would like to think that genetics has more to do with the reason for the Dinka height.

Whatever the cause of the Dinka people’s remarkable height, they are thought to be a welcoming group that takes pleasure in both their culture and being the tallest people in Africa.

Political activist and basketball player Manute Bol was born in South Sudan. The late NBA star was one of the two tallest players in the National Basketball Association’s history, standing at 7 feet 7 inches.

Bol is the son of Manute Bol. As mentioned above, Manute is still recognized as one of the tallest basketball (NBA) players ever. His son, Bol Bol stands at 2.18 m (7’2 ft).

Also read: Africans Who Have Won Medals So Far at The World Athletic Championships

Thon Maker, a South Sudanese and Australian professional basketball player, most recently competed for the Cleveland Cavaliers. He is seven feet tall. His mother and father are also very tall, 6 feet 3 inches and 6 feet 8 inches, respectively.