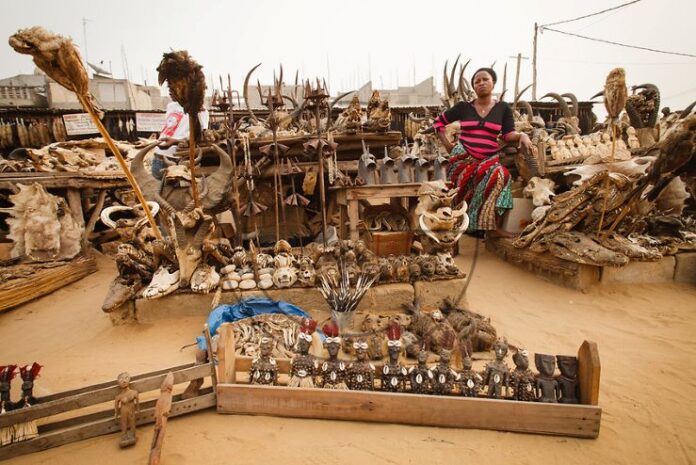 Togo, which is bordered by Ghana to the west, Benin to the east, and Burkina Faso to the north, is home to a number of tourist destinations.

The largest juju market in the world, Akodessewa Fetish Market in Togo is where Babalawos/Dibias, or practitioners of Voodoo, may find almost everything they require for their rituals.

Lome, the capital of Togo, is a small city in the Gulf of Guinea that shares some similarities with Lagos, Nigeria, in terms of its population and the amount of traffic and vehicles on the roads.

Togo is renowned for its palm-lined beaches, hilltop villages, and, most significantly, the Akodessewa Fetish Market, the largest voodoo market in the entire world.

The Akodessewa Fetish Market is situated in the Lomé neighborhood of Akodessewa and dates back to the 17th century.

The voodoo-related traditional talismans and remedies are sold at Marche des Feticheurs, as it is known in French.

In Togo, regardless of the other faith they embrace, at least 60% of the population still engages in voodoo. Additionally, this makes the market possible.

A considerable portion of the market is separated into stalls, and there are also huts that are thought to be the meeting place for fetish priests.

Customers visit the market to contact fetish priests, psychics, seers, and traditional doctors who recommend goods to buy for rituals.

Each stall’s wooden tables are covered with the remains of embalmed creatures, including wolves, dogs, several varieties of dried snakes, horsetails, porcupines, and more.

Charms, cowries, folded clothing, dolls, and other ritualistic artifacts are also hung from the ceilings of each stall.

According to research, customers travel to the market from all over the world, regardless of their race or tribal affiliation, to purchase animal body parts as directed by their traditionalists or after consulting the on-site priest.

It is also said that the market’s talismans and charms can be used to treat anything from the flu to lifting spiritual curses.

Voodoo is a way of thinking that incorporates religion, philosophy, and the practice of medicine. The idea that everything is spirit serves as its guiding concept.

The religion originated in West Africa and is the principal source of other African diaspora faiths in the Americas with names similar to its own, including Brazilian Vodum (Candomblé Jejé and Tambor de Mina), Haitian Vodou, Louisiana Voodoo, Cuban Vod, and Dominican Vud.

Despite centuries of Christian and Islamic influence in the Gulf of Guinea from Nigeria to Ghana, the religion is still very much alive today.

In fact, many Christians and Muslims today who do not self-identify as worshipers of voodoo continue to practice both their Abrahamic faith and voodoo.

This is true for voodooists, Christians, and Muslims alike. When buying these items in Togo, people typically travel to the Akodessewa Fetish Market.

The Akodessawa Fetish Market is comparable to a one-stop shop for all the supplies needed to make a powerful charm or carry out a ritual.

The market is lined with numerous wooden tables that are covered in mounds of strange animal parts, including heads, tails, eyes, skins, paws, and limbs.

Whatever you’re searching for, the voodoo merchants operating at the market have products sourced from nations all around West Africa, so they’re sure to have it.

People from all over the world, regardless of color or tribe, visit the market to purchase animal body parts as directed by their traditionalists or after consulting the local priest.

Voodoo priests can also be found in the market, where they bless people and make talismans and charms that can help with everything from infertility to breaking personal or family curses.

The largest voodoo market in the world, akodessewa Fetish Market, is also frequented by individuals seeking favors, lucky charms, and fruit of the womb.

The Akodessewa Fetish Market, the biggest voodoo market in the world and one of Togo’s few unusual attractions, is a haven for voodoo practitioners as well as a popular destination for adventurous travelers.