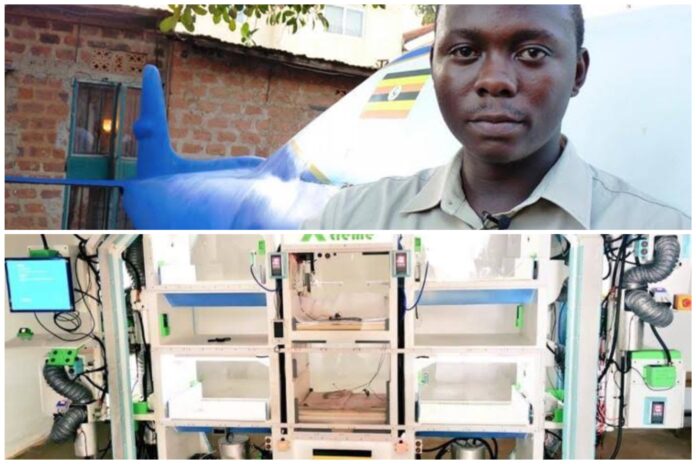 Ugandan engineer, Christopher Nsamba, credited for his invention of the life-saving African-made incubators, has died at age 33.

Sources claim that Nsamba has been battling diabetes and was rushed to Victoria Hospital in Bukoto over the weekend. Unfortunately, he was pronounced dead on Sunday.

“The Department of Health management is deeply saddened by the death of Mr. Christopher Nsamba; known for its innovation and installation of 10 baby incubators in Kawempe and Mukono hospitals.

Other innovations include drones and baby intensive care units for ambulances. May his soul rest in eternal peace,” the health ministry said in a statement.

Nsamba, Founder and Director of the African Space Research Program, is known for his innovation and installation of the world’s largest incubator called SAVANT X.

He largely built this high-tech machine himself and can carry and handle 10 babies at the same time. His incubator has saved thousands of premature babies in Uganda.

Other innovations include drones and baby intensive care units for ambulances. He was the winner of the Innovation of the Year award for the 2021 Heroes In Health Awards.

Here are some of the features of the incubator:
This incubator understands and can make decisions in an emergency when medical personnel are not around.

It carries 10 babies at the same time in 10 different chambers. The machine also has technology that repairs damaged brain cells for newborns.

Some babies have delayed breathing at birth and get dead brain cells, if they survive they become mentally retarded. This machine has technology that prevents brain cells from dying by charging the baby as fast as possible.

Normally, babies are given oxygen through tubes that they pass through their noses. This machine can deliver oxygen to the baby wirelessly without tubes attached to the nose.

Nsamba discovered that some babies are really irritated by this traditional way of giving oxygen, so the machine delivers the oxygen wirelessly.

The machine is equipped with a heat bench that retains heat, so in the event of a power outage, this machine will continue normal operation.

When power is off, sensors, servers and more will draw power from the secondary 1A, secondary 1A and primary 1A BUSS backups and draw heat from its heat bench, controlling all sensors and software. In short, it remains fully functional when the power is off and can warm all 10 babies for six days without power at individually set temperatures; to get full functionality.

This machine remembers the faces of those who work on it. If someone she doesn’t know tries to remove a baby, she locks all the cubicles and calls the department head. If it’s ok, he/she just answers the phone and says overwrite.

Then the new person is allowed to reach the baby when the department head thinks it is an intruder, he/she says on the phone arrest. It will even lock the room doors where the incubator is located to prevent the intruder from escaping, and then continue to lock all 10 babies inside.

In the event of a fire, this machine can prevent smoke from reaching the babies and give them 100% support in the auxiliary oxygen bus.

Unfortunately, Africa seemed to have lost one of its brightest minds, an inventor per excellence, a truly great scientists whose inventions have saved countless lives.