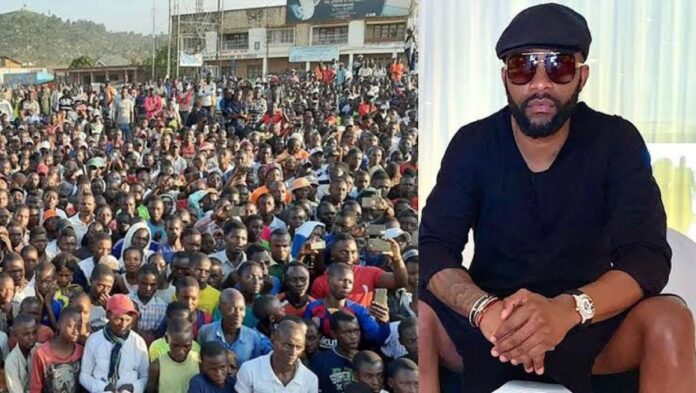 Eleven people were killed on Saturday, including two police officers, at a packed concert in Kinshasa led by Congolese singer Fally Ipupa, the interior minister said.

The capital’s Martyrs Stadium was packed to 80,000, and part of the crowd ended up filling the VIP and reserved areas, Reuters reporters said at the show.

Police recorded “11 deaths, including 10 from suffocation and crowding, and 7 hospitalizations,” Minister Daniel Aselo Okito said in a statement.

Also, read; “Even If I Retire You Still Can’t Attain My Wealth, Address Me As Sir or Daddy– Wizkid Says To Peers

Security forces had already fired tear gas to disperse violent crowds in the streets outside the stadium, where many had gathered ahead of Kinshasa-born Ipupa’s concert, which was acclaimed in the DRC, Europe and elsewhere.

The eventual number of visitors to the stadium far exceeded the number that the State and the private security guards present could control.

In 2020, French police evacuated the Gare de Lyon train station in Paris after people set fire to nearby protests ahead of a planned Ipupa concert.

The eventual number of visitors to the stadium far exceeded the number of state and private security forces present that could be controlled.

In 2020, French police evacuated the Gare de Lyon train station in Paris after people set fire to nearby protests ahead of a planned Ipupa concert.

Kinshasa police chief General Sylvain Sasongo had previously told the ACP that nine people had died amid reports the venue was packed because of the local favorite’s performance, with a witness saying “even the aisles” of the stadiums are overcrowded.

The ACP, which had reporters in the stadium covering the show, said police cordoned off three areas to protect the pitch, the VIP grandstand and the stage.