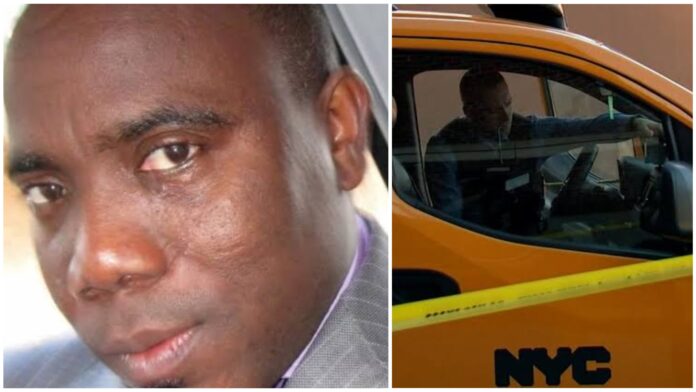 A New York City taxi driver was killed while chasing passengers who tried to rob him in Queens on Saturday, according to the NYPD.

Several organizations are offering a combined $18,500 reward for any information leading to the conviction of suspects in the death of Kutin Gyimah, 52.

Gyimah was completing a shift in a yellow cab minivan in the Rockaway Beach area around 6:30 am., on Saturday when his passengers attempted to rob him after arriving at his destination, police said.

When officers responded to a call about an ongoing attack, they found Gyimah lying on the sidewalk with injury at the back of his head. According to a statement by the NYPD, Gyimah was transported to a hospital, where doctors declared him dead.

The victim’s widow, Abby Gyimah, told CNN affiliate WABC at a news conference on Sunday, “I have no words to explain it. “A good man, he was. He was an excellent dude.”

The investigation is ongoing and no arrests have been made as of Saturday afternoon, police said.

The taxi drivers association is offering a $15,000 reward for the suspects’ conviction, Mateo told CNN.

Mateo reported that the association has so far raised $10,000 in addition to the verified GoFundMe page’s total of more than $69,000, which was set up to assist Gyimah’s family with burial and living expenses.

Mateo told CNN on Sunday that “it was a terrible crime.” “We lost a fantastic man,”

Mateo said he hopes to raise enough money to set up a scholarship fund for the victim’s four children, who he says are ages 3, 5, 7 and 8.

New York Police Commissioner Keechant Sewell, in a tweet on Saturday, encouraged people to submit tips on how to arrest the perpetrators of the “senseless” attack.

“As his loved ones cry, Kutin is on the minds of NYPD investigators who are working hard to arrest those responsible,” Sewell said.

In a statement, the city said the tragedy was “not only devastating, but unacceptable”.

“Violence will not be tolerated in our city, so we work every day to get violent criminals off our streets.

We offer our deepest condolences to the victim’s family, friends and associates at this painful time and will work diligently to bring those responsible to justice,” the statement said.