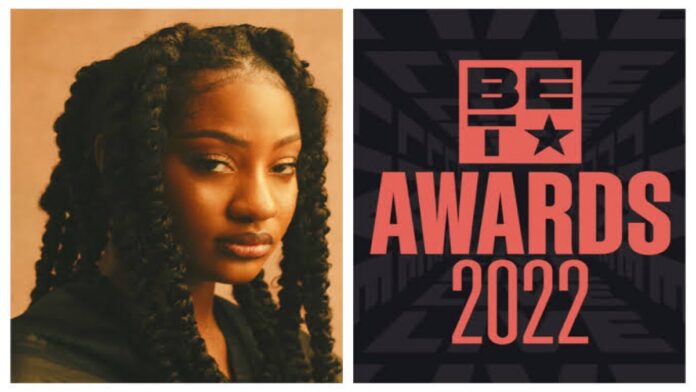 The singer beat the likes of Fireboy, Dave from the UK, Fally Ipupa from Congo, Little Simz, Ludmilla from Brazil, Major League Djz from South Africa, Tayc, and Dinos from France

Tems, 27, also won Best Collaboration for the song “Essence” from Wizkid, which features herself and Justin Bieber.

Recall that the Nigerian singer made history as the first artist to debut at No. 1 on Billboard’s US Afrobeat song chart with the single “Free Mind”.

“Free Mind” is the third track from her Extended Play (EP) titled “Broken Ears,” which consists of seven tracks.

Also, read; Jose Mourinho Calls On FIFA To Stop African Players From Playing For Other Nations

While receiving the award, Tems encouraged “women and girls” to stay on their chosen path, saying that the effort will soon pay off.

Currently, Tems is best known for her performance alongside Drake on Future’s 2022 single “Wait for U”, which debuted on the Billboard Hot 100, making her the first African artist to debut at number one and the second Nigerian artist to do so, while topping the charts.

The talented singer is known for her feature on Wizkid’s single “Essence,” which, after being remastered with additional features by Justin Bieber, reached the top ten on the Hot 100 and earned her a Grammy nomination.

The singer was also recently featured on Drake’s song “Fountains,” which unsurprisingly debuted and peaked at number 26 on the Hot 100.