The Era of the Oyo Empire 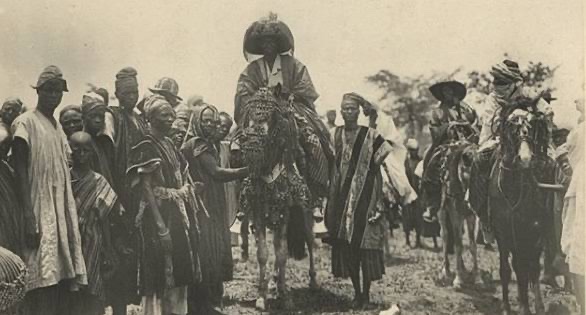 The Old Oyo Empire was a big and powerful force in the Yoruba and Nigerian histories.

Oranmiyan, the grandson of Oduduwa (regarded as the Yoruba father), founded this vast empire in the 15th century.

There are numerous myths and stories related to the establishment of the Empire and the invasion of Oduduwa into Ile-Ife.

Beginning as merely the city of Oyo, it came to prominence as a result of wealth earned from trade with both African neighbors and European nations such as Spain and Portugal.

From the mid-seventeenth to the late-eighteenth century, the Oyo Empire was the most politically important Yoruba state, controlling not only neighboring Yoruba states, but also the Fon Kingdom of Dahomey (present day Benin Republic).

The Rise of the Oyo Empire

It is important to understand that the Yoruba rich culture extends beyond Africa and even into South America.

Oyo Empire was well-known for its industrial manufacturing of brass. Old Oyo was and still is the most powerful and authoritative party of the early Yoruba empires due to its wealth and military might.

The Oyo Empire was one of the greatest empires in the West African sub-region during the nineteenth century; some writers even compare it to the British Empire at its apex.

The Oyo Empire was a sociocultural entity that existed in pre-colonial Nigeria, mainly in the southwest and beyond. It was a Yoruba Empire that included the “southwest zone and the western half of the north-central zone” of today’s Benin and western Nigeria.

At its peak, the Oyo Empire was the largest Yoruba polity. Historians and writers attribute its emergence to its citizens’ better organizational and administrative abilities, fortunes and wealth obtained from regional trade, and enormous terrifying and powerful army.

Without a doubt, the Oyo Empire was one of the most powerful states in Western Africa from the mid-17th century to the late-18th century, with power and influence felt throughout Yoruba lands as well as other African states, most notably the “Fon kingdom” of Dahomey as previously mentioned.

Also read: Amazons of Dahomey, The Story of the Fearless Female Warriors

The Oyo Empire developed and profited on regional trade and became the centre for transferring slaves from the interiors and hinterlands to the coast where they waited for European slave ships.

The Slave Coast was named after the Oyo Empire’s extensive involvement in human trade.

However, due to regular internal quarrels by various factions, former vassal’s states re-established their independence, and by the mid-nineteenth century, the Oyo Empire had been sacked and abandoned, with the Empire disintegrating into small rival chiefdoms and eventually falling to the expanding Islamic states to the north.

Formation of the Oyo Empire

The Alaafin was the Emperor’s supreme authority. Although not authoritarian in character (owing to the established system of checks and balances), he was undeniably a driving force in the Empire’s expansion.

Three eunuchs “Efa’s” accompany Alaafin to the afterlife. Oyo chose a parliamentary form of government and a constitutional monarchy.

The Oba was the chief administrators of the Yoruba states, with administrative powers over the entire Empire.

Oba pays tribute to the Alaafin in honor of their ancestral land, and those sacrifices were a source of income for the kingdom.

The Alaafin’s powers were checked by a committee of “Kingmakers” known as the Oyomesi. They had legislative powers and were led by the Bashorun.

The Bashorun is an important figure in the construction of the empire, with the authority to impeach either the Alaafin or the Oba.

To avoid dictatorship, the Oyo Empire was supported by locals, with powers dispersed among many groups. The presence of the Ogboni Fraternity, in turn, checked Oyomesi’s powers.

The Ogboni were feared and were known as “The Mouthpiece of the Gods,” with their office being led by the Ifa Priest. They served as the empire’s judicial arm and were consulted for spiritual solutions, strategy, and prayers. While the Baales were in charge of revenue generation.

The main expansion of Old Oyo occurred in the second part of the nineteenth century when Alaafin Orompoto began to use the income gained from trade to develop a powerful and well-trained cavalry (horsemen’s army).

After conquering and subjugating the Kingdom of Dahomey, Oyo’s wealth surged and the empire flourished for many years.

Fall of the Oyo empire

The Oyo Empire, like many powerful kingdoms and empires in history, began to encounter both internal and external difficulties in the middle of the 18th century, finally leading to the dissolution of central authority.

According to historians, here are some factors that led to the fall of the Oyo empire.

Size of the Empire: Though this is still debated, some academics blame the empire’s demise on the enormous vastness and diversity of the entities under its control, which made it difficult to administer. Furthermore, the size issue was worsened by communication challenges.

Constitutional crises: As previously stated, some experts claim that the demise of the Oyo Empire was caused by the constitution’s weakness.

The unwritten constitution allowed many rights to particular state officials and dignitaries; nevertheless, some of these officials used their powers and authority in ways that were detrimental to the general welfare of Oyo.

For example, between 1754 and 1774, the prime minister Bashorun Gaha, the head of the Oyomesi, utilized his power to increase his personal influence and authority.

As the chief of the Oyomesi, he executed around nine successive Alaafin (kings), upsetting the balance of power in the Empire.

Weak leadership: At the end of the 18th century, the Empire was led by weak leaders Alaafin, who lacked the necessary abilities and tack to lead the Empire through its most difficult periods.

The period also witnessed the arbitrary regulations and decisions made by Alaafin, such as Alaafin Aole’s instruction to his army chief, Aare-ona-kankanfo, to invade the sacred city of Ile-Ife. He also failed to rein in the Empire’s power-seekers and opportunists.

Demoralized army: The Oyo Empire possessed a formidable cavalry force that neighbors feared. The empire’s army, led by powerful leaders, was able to expand its powers, conquer new countries, and defend the empire against invasion.

However, by the end of the 18th century, it was apparent that the once cavalry army had devolved into a shell of its former glory.

This deterioration occurred under the reign of Alaafin Abiodun, who preferred to accumulate money and engage in the slave trade at the expense of the army.

This had a significant impact on the army’s combat morale, and they were unable to defend the empire from external assault from that point forward, as well as the end of their war expeditions.

Slave trade: It is safe to conclude that the banning of the slave trade in Britain in 1807 dealt a devastating blow to the Oyo Empire’s source of economic revenue.

Some Alaafins, such as Alaafin Abiodun, placed so much emphasis on trade that the Empire coast became known simply as the Slave Coast.

By the time Britain began to implement its no-slavery policy in West Africa, the economy had suffered greatly, causing state authorities to scurry for money, resulting in tensions and dissension among them, creating an ideal opportunity for external aggressors to exploit.

The Ilorin factor:  By the time the jihadists attacked, the Oyo Empire had already been undermined by internal disagreements, resulting in instability and a lack of a united front against the invaders.

The stronghold in Ilorin was a frontier settlement where the Aare-ona-kankanfo Afonja was meant to use and defend the Empire from external aggression.

But, for personal reasons, he revolted against the central government and attempted to carve out his own dominion.

To accomplish his goal, he enlisted the assistance of an itinerant Fulani preacher and his followers; nevertheless, the jihadists finally assassinated Afonja, took over control in Ilorin, and continued their march towards Oyo.

Instead of battling to safeguard Oyo’s integrity, ambitious forces were focused on carving out centres of authority for themselves. As a result, the Empire was unable to mount a serious defence against the Fulani armies, and the Oyo empire was captured by jihadist forces in 1838.

The impacts of the Oyo Empire’s downfall

Prior to the empire’s collapse, the wide region that was under its influence and jurisdiction had relative stability due to its strength and might; with the loss of that power, wealth, and prestige, the area also lost stability, plunging the whole Yoruba area into civil conflict.

For starters, one of the most visible results was the dissolution and dismemberment of the Empire into smaller chiefdoms.

This also resulted in the creation of erstwhile protectorate governments such as Ibadan, Oshogbo, and Ijaiye, which sought to fill the void. The fall of the Oyo Empire also had an impact on the area’s population dispersion.

Second, the fall of the Oyo Empire also resulted in cultural changes. This is owing to the fact that as displaced people fleeing the Empire’s battle moved into new places, they modified and, in some cases, displaced indigenous peoples. Languages, music, dance, arts, attire, and other disciplines experienced significant modifications. Oyo cultures and traditions were often practiced in locations where people immigrated. Even in extreme circumstances, the languages of the immigrants influenced the languages of the destination towns.

Third, the fall of the Oyo Empire resulted in the development of a new government system. Politically, it resulted in the replacement of the old Obaships system in place with a new type of administration, such as the military autocracy led by Kurumi in Ijaiye, the warrior class governing system in Ibadan, and the Abeokuta rotation systems.

These arrangements were developed in response to the excesses and weaknesses of the previous government structure.

Finally, it should be remembered that the advent of significant political instability in Yoruba territory was one of the key consequences of the fall of the Oyo Empire in the nineteenth century.

The evidence is clear, as the history of ties among the numerous republics that emerged from the Empire’s demise was predominantly one of war.

This is significant since, even before the demise of the Oyo Empire, there was an internecine conflict that the Oyo Empire was able to manage and control to a large extent.

Hence, the fall of the powerful Empire merely increased the number and tempo of the conflicts that altered the map of Yoruba territory.