Amazons of Dahomey: The Story of the Fearless Female Warriors 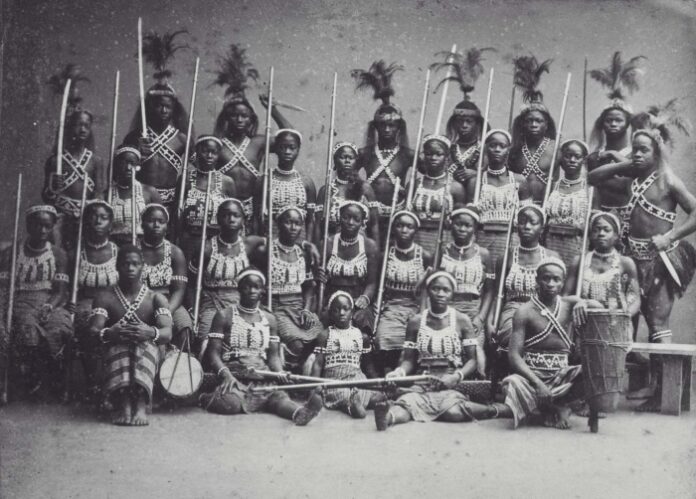 Dahomey (present-day Benin Republic) thrived in the 17th century under the protection of the amazons of Dahomey, an all-women warrior force that inspired Viola Davis’s recent movie The Woman King.

The movie was also shot in Benin Republic, which stretches along the coast between Nigeria and Togo.

The Amazons of Dahomey were noted for their fearlessness, whether conquering neighboring tribes or repelling European invaders.

It is believed that only 17 out of 434 Amazons survived one of the final battles against the French in 1892, before the kingdom became a French province.

They were known as the Mino (our Mothers), Ahosi (king’s wives) or Agojie, however, Europeans dubbed them the amazons of Dahomey due to their resemblance to the Amazons of Greek mythology.

As a result, Dahomey became one of the dominant kingdoms in the slave trade alongside the Oyo Empire, which exploited slaves as a commodity exchange in West Africa until the British Empire ended the slave trade in the region.

Due to the scarcity of men, the monarchs of Dahomey most likely recruited women into their armies.

The origin of the amazons of Dahomey

The origins of the Amazons of Dahomey are a bit sketchy. According to one source, it was the third King of Dahomey, King Houegbadja (who ruled from 1645 until 1685) that is claimed to have founded the Amazons as a corps of elephant hunters called the Gbeto.

Due to this, it is believed that elephants were nearly extinct in the area by the mid-nineteenth century.

Later on, the Gbeto were then incorporated into the army of female troops. They were dressed in brown tops and knee-length brown and blue shorts.

According to another source, Houegbadja’s daughter Queen Hangbe (who ruled from 1708 to 1711) formed a squad of female royal bodyguards.

According to legend, her brother and successor King Agaja employed them successfully in Dahomey’s destruction of the neighboring kingdom of Savi in 1727.

However, it was under King Ghezo’s reign (1818-1858) that the Amazons of Dahomey became a vital part of the Dahomean military.

Ghezo was well-known for instituting military reforms. He gave the army a high priority, raising its funding and formalizing its structure from ceremonial to serious military.

In the mid-nineteenth century, the number of Dahomeyan women soldiers was estimated to be several thousand, accounting for 30-40% of the army.

Ghezo enlisted both men and women from foreign captives. Women soldiers were also recruited from free Dahomean women, with some enrolling as early as eight years old.

Some Fon women became soldiers voluntarily, but others were compelled to do so when their husbands or fathers complained to the monarch about their behavior.

Membership in the Mino was meant to hone any aggressive personality qualities for the purpose of battle.

They were not permitted to have children or participate in married life as members (though they were legally married to the king) and they were mostly virgins.

The Mino trained by engaging in vigorous activities, however, they had some privileges, such as a plentiful supply of tobacco and drink and the ability to stay in the King’s palace after dark, which the males were not permitted to do.

They also had up to 50 slaves per soldier – accounts stated that when the soldiers left the palace for the outside community, they usually had a slave in front of them, ringing a small bell to alert people of the Amazons approaching and for them to give way, bow, and avert their eyes as they approached.

The Amazons of Dahomey were revered in the region for successfully expanding the Dahomey empire beyond its capital, Abomey. They trained hard, often engaging in hand-to-hand fighting amongst themselves.

As they learned survival skills, they were taught to be disciplined. Their tolerance to suffering and death was put to the test during the initiation phase.

The women’s army was divided into three wings: the left, right, and Fanti, which served as the elite center wing.

Each of these wings was divided into five subgroups. The first was the Gbeto, also known as Huntresses. They began as an elephant huntress corps. The next group is the Gulohento, or Riflewomen.

Also, the Reapers, also known as the Nyekplohento in their native tongue, were few but feared.

They possessed razor-sharp knives capable of slicing a man in two in a single motion. There were also Archers known as the Gohento. These women were deadly with bows and arrows, shooting hooked and poisoned arrows with pinpoint accuracy.

Finally, there is the Agbalya, often known as Gunners. They used the army’s weaponry, which included German Krupp weapons and antique iron guns sold to the Kingdom of Dahomey by Europeans.

Jean Bayol, a French naval officer who did visit Abomey in December 1889, observed a teenage recruit, Nanisca, who “had not yet killed anyone,” being assessed. She was brought before a juvenile prisoner who sat shackled in a basket, and she:

“walked jauntily up to, swung her sword three times with both hands, then casually chopped the final flesh that connected the head to the trunk… She then sucked the blood off her weapon.”

Serving in the Mino provided women with the opportunity to “achieve positions of authority and influence” in a setting designed to promote individual empowerment.

The Mino were likewise wealthy and well-to-do. According to the famed adventurer Sir Richard Burton, who visited Dahomey in the 1860s, Gezo’s female army lived in his compound and were well supplied with tobacco, whiskey, and slaves—as many as 50 to each fighter.

European invasion into West Africa accelerated in the later half of the nineteenth century, and in 1890, King Béhanzin began fighting French forces in the First Franco-Dahomean War.

The ladies “handled brilliantly” in hand-to-hand fighting, according to European witnesses, but they fired their flintlocks from the hip rather than the shoulder.

The Mino took part in one important battle, Cotonou, in which hundreds of Dahomeans (many of whom were Mino) attacked the French lines and battled the defenders in hand-to-hand combat.

The Mino were decisively defeated, with hundreds of Dahomey troops being killed down. According to reports, 129 Dahomey fighters were killed in melee battle within French lines.

By the end of the Second Franco-Dahomean War, special Mino troops had been assigned to target French officers.

The Amazons’ bravery inspired French soldiers, notably those of the French Foreign Legion, who later wrote about their “great valor and audacity” in battle.

The Dahomey Mino, however, could not win against a military unit with clearly superior equipment and a longer bayonet.

During a battle with French soldiers at Adegon on October 6, 1892, during the second war, the French officers wiped out the majority of the Mino corps in hand-to-hand combat in a couple of hours.

The amazon women played a significant role in the conflicts against neighboring countries, frequently seizing captives for the slave trade.

Despite this, they suffered a number of defeats. Notable were the unsuccessful invasions on Abeokuta, the Egbas’ capital, in 1851 and 1864.

In addition to the first and second Franco-Dahomean wars. The French seized Dahomey in 1892 and were particularly harsh on the Amazons, murdering many of them partly because they saw the women warriors as the last line of defense against their invasion of the state.

Nevertheless, even their foes praised the bravery of Dahomey’s fierce female warriors.

During the two-year conflict with France, about 2,000 Amazons were killed. It is estimated that only about 50 women survived and faded into the colonial system.

In Abomey (the kingdom’s old capital), there is little to no trace of them. According to legend, the last Amazon died in the 1970s.

The Dahomey Amazons represent African women’s power and tenacity, as well as the immense influence and authority they once had.

Even though there are speculations of the Amazons of Dahomey still existing in Benin Republic, their roles are now believed to be strictly ceremonial.

Regardless, these warrior women will always have a deep connection to the rich history of the great West African Empire.