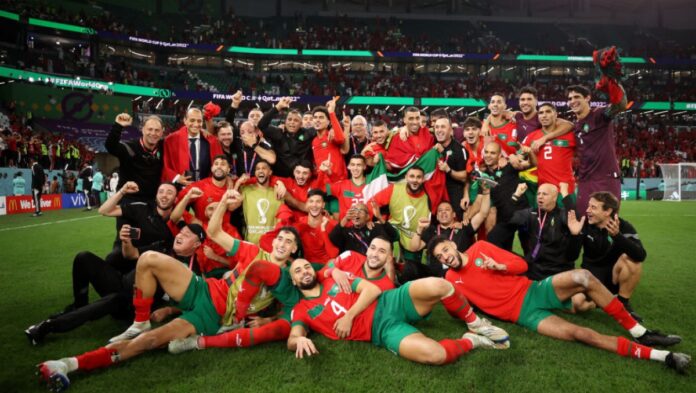 Morocco has climbed to 11th in the latest FIFA rankings, becoming this year’s “highest rising” after scoring 142 points in the last 12 months.

The Atlas Lions as they are often called, are poised for a place in the top 10 after a brilliant performance at the World Cup in Qatar, where they became the first African to reach the semifinals.

Former world champions Argentina has moved up to second place in the latest FIFA rankings behind arch-rivals, Brazil after winning the World Cup in Qatar.

Argentina captain, Lionel Messi scored twice and again on penalties to lead his country to a 4-2 penalty shootout win against France on Sunday, with the title match initially ending 3-3 after 120 minutes.

A win in regular time or extra time would have lifted Argentina to the top of the world rankings. However, the world cup champions sit second behind five-time world champions Brazil, who are now slightly leading on points.

France climbed into third place after the two-time world-cup in recent decades, defeating Belgium, who failed to reach the knockout stages.

Croatia, who beat Morocco in qualifying for third place and finished runners-up in Russia four years ago, are seventh behind England and the Netherlands.

Also, read; Amazons of Dahomey: The Story of the Fearless Female Warriors

Australia climbed 11 spots to 27th as the Australian team surprised everyone by reaching the last 16 of the World Cup where they gave Argentina a really tough game. Cameroon climbed 10 places to 33rd, thanks largely to their famous win over Brazil in the group stage.

Belgium have moved up from second to fourth place and are likely to fall further behind after surprising elimination from the World Cup group stage.

Spain, Germany, Mexico, and Uruguay fell, along with European champions, Italy, inevitably after Roberto Mancini’s side failed to reach the World Cup.