The History of Sierra Leone 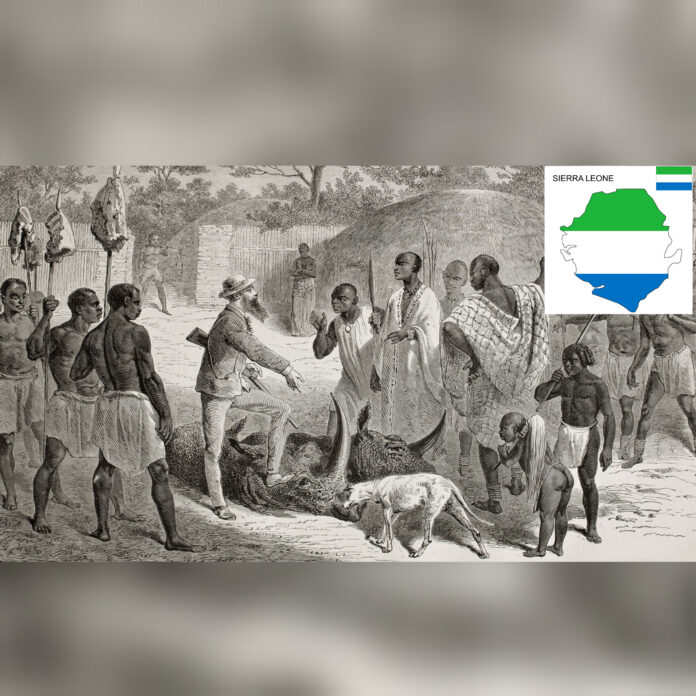 Sierra Leone has been in existence for about 2500 years.

A tribe called the Limba people were the first known tribe to live in Sierra Leone. They have a dense tropical forest that separates them from other parts of West Africa. This land was a refuge for people escaping the violence of jihad. The Portuguese explorer Pedro de Sintra named the country and the region was mapped in 1462.

The estuary in Freetown is a perfect harbour for ships to find shelter and collect drinking water before continuing on their journey. The trans-Atlantic trade brought international attention to this spot. This form of trade superseded the trans-Saharan trade.

In the 16th century, the Mane people invaded the territory and conquered all the people who lived on the coast and militarized Sierra Leone. The conquerors mixed up with the local people and the chiefdoms and kingdoms remained in a state of conflict. Some of the captives were sold off to the European slave trade.

Trade flourished in the 17th and 18th centuries. Freetown served as a centre for antislavery efforts and trade was abolished in 1807.

Abolitionists from Britain helped organize a colony for the loyal black people at Freetown and this spot became the capital of Sierra Leone. At this time, Sierra Leone was called British West Africa. A naval squadron was based in this spot for intercepting slave ships. As the slaves got liberated from possible trade, they were placed in the colony and so growth was imminent.

Released Africans joined the West Indian and African soldiers who fought for Britain in Napoleon’s wars. The early descendants were referred to as Creoles.

In the colonial era, the British and Creoles increased their control over the area. They secured peace and commerce flourished. They stifled the slave trade and contained the inter chiefdom wars.

In 1895, Britain drew borders for Sierra Leone and declared the country to be their protectorate. This led to the armed resistance and the Hut Tax War in 1898. The dissent led to reforms and the fight for the rights of Creoles.

They fought for rights of who to rule them, trade unions to regulate employers and the peasants looked out for justice for their chiefs.

In the 1950s, a new constitution united the Crown Colony and protectorate. Both territories had been governed separately until this point.

Sierra Leone gained independence on 27 April 1961. They became a part of the Commonwealth of Nations. Ethnic and language barriers have been an issue when it comes to unity. The Mende, Temne and Creoles have rival power blocs. They have had autocratic governments or civil wars. They have never tasted a democratic government.

Most Sierra Leone Creole people are descendants of the poor black and the African Americans who were freed (Nova Scotia Black Loyalists). They also include the West Indians (Jamaican Maroons) and Liberated African slaves. These those settled in the West of Sierra Leone during 1787 and 1885. The British established this colony. The British Abolitionists supported them. It was established under the Sierra Leone Company as a place for free men. The settlers called their settlement Freetown because it represented a place of freedom to them.

In the 19th century, to engage in trade, the British and Creoles in Freetown increased their involvement in the territories. They promoted trade through treaty-making military expeditions.

The terms of the treaty required them to give the native chiefs income in exchange for maintaining peace with their tribal neighbours.

The chiefs were required to keep the roads open, allow the British to collect customs duties from the traders and submit any dispute to British resolutions.

After years, the British suppressed slave trading by the chiefs. When they were unable to persuade the chiefs by financial rewards, the Army and Navy attacked chiefs who did not conform to the dictates of the British.

Throughout the 20th century, there were many riots against the tribal chiefs. It got to a peak with the Protectorate-wide riots. Reforms changed and the forced labour system was abolished. The chief’s powers were reduced.

Sierra Leone remained a colony and a protectorate. In November 1951, Margai created the document that provided a framework for decolonization. The British agreed to grant Sierra Leone’s Declaration of Independence. It never worked. On April 27, 1961, Sir Milton Margai led Sierra Leone to independence from Britain. He then became the country’s first prime minister.

Three military coups gave way to more and more plots to overthrow the president. Nationwide student demonstrations could not change the nation’s politics. It was all centred on keeping President Steven in power. Stevens eventually retired in 1985 after 18 years in power. Then a new president, Momoh took over until 1991.

Between 1991 and 2002, there was a civil war in Sierra Leone. Many lives were lost and 1,270 primary schools were destroyed. The economy was collapsing and yet corruption was rife. Abuse of power was the order of the day.

A peace accord was signed in Lomé on 7 July 1999 to end the civil war. A Local Government Act of 2004 was passed by Parliament. Local government councils were introduced back to Sierra Leone after more than thirty years.

More than 50,000 lives were lost during Sierra Leone’s civil war. Hundred became refugees in Guinea and Liberia. In January 2002, President Kabbah declared the civil war over. The disarmament process was complete in 2004. Sierra Leone survived the Ebola virus epidemic in 2014.

In 2018, they held a general election. Neither candidate reached the required threshold of 55% so the second round of voting was instituted. Julius Julius Maada Bio was eventually elected with a 51% vote.

Also read: Check Out The Reasons Why Being A Vegan Is Not Popular In Africa