The Life of Patrice Lumumba 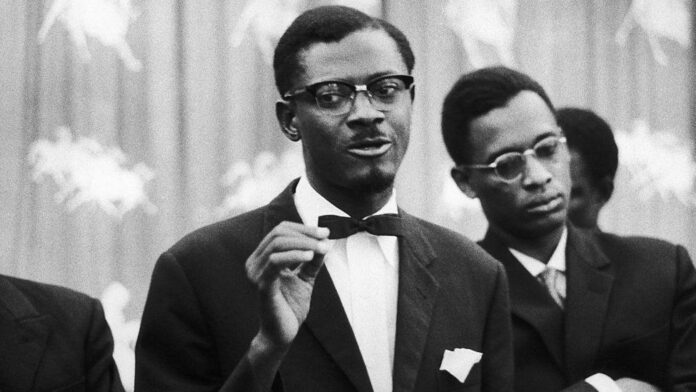 Patrice Lumumba was born on July 2, 1925, near Katako-Kombe Town in the Sankuru district of north-eastern Kasai, Congo (modern-day Democratic Republic of the Congo).

Lumumba belonged to the Batetela (Tetela), a vibrant branch of the Mongo-Nkutshu family of central Congo and he was raised in a mud-brick house.

Due to the fact that Congo was a Belgian province, he attended both Protestant and Catholic schools sponsored by white Belgian missionaries.

Patrice Lumumba was exceptionally brilliant and he asked too many difficult questions.
In 1954, after finishing high school, he secured a job as a postal clerk in the provincial seat of Statesville (now Kisangani).

Lumumba was ambitious and aimed for social mobility, predominantly to form part of the “evolue”, the upper strata of the middle class; the highest-level indigenous Congolese could attain in the Belgian colony.

Patrice Lumumba quickly rose to prominence as a leader of the évoluécommunity, organizing a postal workers’ union.

He also became a protégé of local Liberal Party sympathizers at a time when the attitude of Liberal Minister of Colonies Auguste Buisseret regarding mission schools was causing violent clashes between Catholic and non-Catholic colonial establishment members.

However, in 1955 Patrice Lumumba was charged with fraud and imprisoned. A year later, Lumumba’s sentence was shortened as a result of a long interview with King Baudouin during his visit to the Congo in 1955.

While imprisoned in 1955, Lumumba questioned his status as an evolue and embraced Pan-Africanism and Congolese nationalism.

The concept of nationalism helped the Congolese society’s various ethnic groups to band together and fight against colonial economic exploitation, political repression, and cultural persecution.

Later in 1957, Patrice Lumumba was employed as the sales director for a brewery company in Léopoldville (now known as Kinshasa) after working for nearly three years.

This was how Lumumba left Stanleyville (now Kisangani) for Kinshasa, the Congo’s capital city.

Lumumba left Stanleyville for Léopoldville in 1957, having been appointed to the much better paying position of sales director for a major brewery, just in time to witness the first manifestation of organized political activity in the form of a bitterly fought municipal election won by Joseph Kasavubu’s Abako.

Patrice Lumumba made his political debut in Léopoldville as the leader of a tribal association that participated in an alliance of non-Bakongo elements in the capital.

Lumumba joined the Belgian Liberal Political Party while working in Stanleyville. When he moved to Léopoldville to work at the brewery, he assisted in the formation of the Movement National Congolais (MNC).

Lumumba’s outgoing demeanor and public speaking abilities won him many fans, and he became a focal point in the party.

Lumumba was soon immersed in a less local initiative: the formation of a super-ethnic movement known as the Movement National Congolais (MNC), which was initially headed by educated Congolese tied to Catholic circles.

Lumumba’s dynamism and oratory skills quickly elevated him to prominence within the party.

He led an MNC team to the All-African Peoples’ Conference in Accra in December 1958, when he met Kwame Nkrumah, with whom he kept in contact throughout his brief political career.

In 1959, the Belgian-led government declared that Congolese local elections would be held within five years of full Congolese independence.

Various political groupings and some MNC members who supported a unitary form of government for the Congo chose Lumumba to head them at the Luluabourg Congress gathering in April 1959.

Other leaders inside the MNC, however, saw Lumumba’s beliefs as radical and detrimental to the nation. It is said that as a result of this disagreement, the MNC party split in July 1959, with the most of members siding with Albert Kalonji.

Despite the fact that Lumumba had departed Stanleyville, he was temporarily jailed in November 1959 on grounds of inciting violence.

He was then released in time to attend the Round Table Conference in Brussels, which helped pave the path for Congo’s general elections.

When compared to other Congolese leaders, Lumumba was an effective speaker in each of the Congo’s major vehicular languages, as well as in French, which aided his campaign.

Following the general elections in May 1960, Congo gained independence on June 30, 1960, with Patrice Lumumba as the leader of the largest single party.

He was chosen as the Congo’s first prime minister, while his political rival, Joseph Kasavubu, was elected president.

During his brief leadership, Lumumba faced a series of events rarely encountered by a newly independent country: army revolt and separation of Katanga and then Southern Kasai, orchestrated by Belgian interests and the unilateral deployment of Belgian forces.

The Congolese elite feared Lumumba’s concept of nationalism and participatory democracy, therefore they rebelled against him.

Almost immediately after the June 30th independence date, certain army units rebelled, primarily because of disagreements with their Belgian commander.

Moise Tshombe took advantage of the resulting chaos, declaring that the mineral-rich region of Katanga was seceding from the Congo.

Belgium dispatched troops, supposedly to defend Belgian people caught up in the chaos, but the Belgian forces primarily landed in Katanga, where they supported Tshombe’s separatist rule.

The Congo requested that the United Nations evict the Belgians and assist them in restoring domestic order. Lumumba, as Prime Minister, did what he could to improve the situation.

His army was a fragile instrument of power, his civilian administration was unskilled and inexperienced, the United Nations soldiers (whose presence he had sought) were condescending and forceful, and the political ties that supported his dictatorship were shaky.

The Belgian forces remained, and the Katanga secessionist movement proceeded.
Lumumba disliked Belgium and the UN for not helping to restore order and unity in Congo.

It is believed that some Congolese elite conspired with foreign states, specifically the CIA and US administration, to get rid of Lumumba.

Lumumba turned to the Soviet Union for planes to transport his troops to Katanga after the United Nations refused to aid in suppressing the Katangese insurrection.

He invited independent African states to a meeting in Léopoldville in August to rally behind him. His actions frightened many people, particularly Western powers and allies of President Kasavubu.

When Patrice Lumumba requested military assistance from the Soviet Union against the secessionist districts of Southern Kasai and Katanga, President Kasavubu fired him on September 5, 1960.

This marked the beginning of the end of Patrice Lumumba’s political career. The Congolese National Assembly disagreed with the president’s decision and reinstated Lumumba as prime minister.

This did not happen because a group of the Congolese army led by Colonel Mobutu took over the government instead and Lumumba was placed under house arrest in Léopoldville in October, guarded not just by Mobutu’s forces but also by UN forces.

Patrice Lumumba escaped from house confinement when the General Assembly agreed to recognize Kasavubu’s authority and attempted to fly to Stanleyville, where his followers had power.

On December 2, however, he was apprehended by Mobutu’s forces and arrested. Lumumba was initially detained at a military camp in Thysville (now Mbanza-Ngungu), but fears that the soldiers there were sympathetic to him prompted Belgian, Congolese, and Katangan authorities to arrange for his transfer to a more secure location—and one that actually resulted in his death.

The legacy and death of Patrice Lumumba

Nevertheless, Lumumba’s prominence and the power of his adherents posed a challenge to the Congo’s insecure new rulers.

This was illustrated when Lumumba nearly persuaded his military detainees to assist him in regaining power.

This incident simply reinforced the authorities’ intention to oust the deposed prime. The decision to transport him to either Southern Kasai or Katanga (where he would very certainly be executed) had been deliberated for some time as a possible preliminary to reconciliation with these two separatist regions.

Lumumba and two companions, Joseph Okito and Maurice Mpolo, were flown to Elisabethville (now Lubumbashi) on January 17, 1961, and handed over to Katanga’s separatist administration and its Belgian advisors.

They had been assaulted by the military escorting them on the way there, and they had been beaten again once they arrived in Katanga.

Lumumba, Okito, and Mpolo were executed later that day by a firing squad under Belgian authority. Although their bodies were initially buried in shallow graves, they were later dug up by Belgian officers and cut into pieces before being dissolved in acid or incinerated by fire.

The Katanga government made incompetent attempts to conceal and subsequently camouflage the murder, but the shock waves produced enough international pressure to support the approval of a Security Council resolution authorizing the use of force as a last resort by UN soldiers in the Congo.

This resolution set in motion a chain of events that resulted in the restoration of civilian rule in Léopoldville and, eventually, the eradication of all resistance movements.

Lumumba was not a Communist, had little interest in ideologies, and was more opportunistic than truly radical, but his name is still being mentioned even after so many years.

Lumumba’s memory is most legitimately used as a strong believer in the potential of African nations to define their own destinies and free themselves from colonial domination.