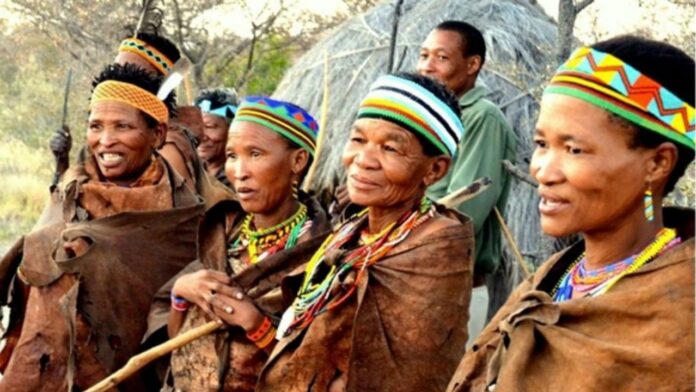 How long have Africans lived on Earth? This is a question that is often raised in conversations and discussions about Africa. The curiosity to know which tribe is the oldest in Africa is on the high and over here, we’ve decided to take advantage of your curiosity.

In this article, we talk about the oldest inhabitants to walk the face of the African continent and where they are found. I’m talking about the San Tribe. It is believed that the San tribe has been living in Africa for the last 30,000 years and are still settled in many parts of Southern Africa.

Let’s get to know the San Tribe.

San Tribe – The Oldest Tribe to Live in Africa

Archaeologists and geneticists have agreed, that the San community are the descendants of the original Homo sapiens groupings, who occupied Southern Africa, for at least 150,000 years.

According to genetic studies and the geneticists, one of the oldest gene patterns found in modern humans is that of the Khoe-San, and it dates back to around 800,000 years.

This indicates that a large percentage of humans are all descendants of this original gene type. The only exception is that of Tanzania’s Hadzabe hunter-gatherers and the genetic descendants from the Neanderthal and Denisovan genetic groupings.

About the San People

Khoe-San people and their descendants were hunter-gatherers until the Khoekhoe ancestors acquired domesticated animal stock about 2500 years ago.

The Khoekhoe seem to have migrated into South Africa about 2000 years ago either from Namibia or Botswana, bringing with them a sheepherding culture, and social organizations different from other hunter-gatherers. Typical hunter-gatherer groups were small and without complex political leadership or any military capacity.

They lived in coastal areas, the Southern Cape, and the major rivers. During this period they mingled with the San hunters since they all lived together in the same area.

In the Garib River area, archaeologists believe that the San were friends with Einikhoe (possibly from the N|u word Kx’ain, river, drink. Kx’ainikhoen). Later, after the European occupation of the Cape, there was a conflict with neighboring people.

This conflict resulted in violence between San groups and others such as the Namakhoe, Orakhoe, Oorlams, and Griquas. The San at this time were driven further out of the river areas into remoter areas with less water.

The first Bantu-speaking agriculturalists moved into Southern Africa about 1800 years ago with the major migration of agro-pastoralists happening about 800 years ago.

Over the following centuries, there was extensive interaction between the San and the various Khoe and Bantu-speaking immigrants. South Africa’s dominant cultures and languages are all shaped by this contact.

Read Also: Mwila Tribe of Angola: A Culture Where Women Cover their Head in Cow Dung

The sad reality about the San Tribe today

In this present day and time, some of the San people have gone into hiding because of the overexploitation from governments and foreigners of their culture and way of life.

Others have equally been displaced because of the high demand for wildlife conservation, thereby losing their original homes. All these ultimately destroy their unique way of life.