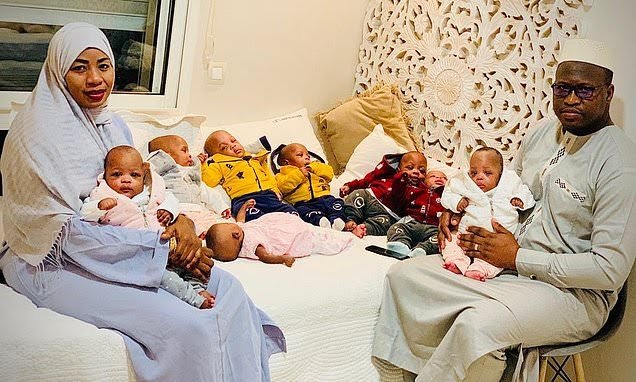 Halima Cisse and her husband, Kader Arby broke the world record five months ago after they welcomed nine miracle babies born at Ain Borja clinic in Casablanca, Morocco.  Before Cisse, Nadya Suleman had set the world record after giving birth to eight surviving babies in 2009.

Cisse’s nine children were born naturally and had to remain in the incubators due to low birth weight.   After five months of specialized care from the nurses and doctors the babies have gained the recommended weight and can finally leave the hospital.

Speaking to MaliOnline the excited mother, Ms. Cisse noted, “All of them are getting on very well, and are a joy to look after. They are getting stronger every day and it may well be they are allowed to leave full time medical care soon, so that we can take them home.”

The nine babies include four boys and five girls namely, Mohammed, Bah, El Hadji and Oumar for the boys. The girls are called Adama, Hawa, Fatouma, Kadidia and Oumou. The babies were taken out of the incubators in early August. Since then the family has had to live in a flat near the hospital to enable the medical staff to continue monitoring the babies.

They are now ready to return to their home country Mali. They were earlier visited by Mali’s health minister, Djaminatou Sangare who is helping organize how the family will be safely flown home.

Share
Facebook
Twitter
Pinterest
WhatsApp
Previous articleKuba under Kot Mabiinc: The most inventive kingdom in Africa that never saw slave-trade
Next articleTennessee Unveils a Monument across the street from a Confederate monument to Honor Black Soldiers in Civil War