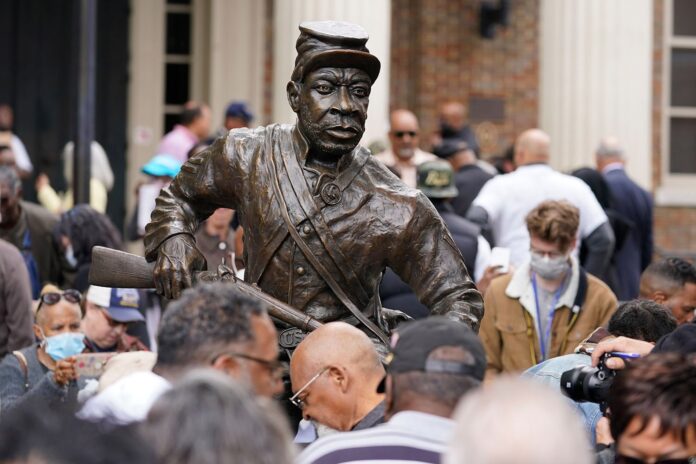 On Saturday, the city of Franklin, Tennessee unveiled the statue of a United States Black troop’s soldier. The monument is in honor of approximately 180,000 Black people that joined the Union Army during the civil war.

The monument was strategically placed at the same spot where the Black people enlisted into the Union Army decades ago. Designed by Joe E. Howard, Tennessee based sculptor, the statue shows a black soldier holding a rifle across his knee and leaning on a tree stump with his foot.

According to Rev. Chris Williamson, who was in the forefront in spearheading the building of the monument, the statue means hope, courage, possibility, dignity and valor.  “This glorious statue will stand in front of the historic Courthouse in Franklin where hundreds of escaped slaves in Williamson County and surrounding areas fled in order to enlist in the Union Army. This statue represents the 186,000 United States Colored Troops soldiers who courageously fought for this country’s freedom and their own freedom. These black men are worthy to be honored and celebrated,” noted Williamson in a statement.

Journey to Installing the Monument

Plans to build the monument in honor of the black slaves were started four years ago by Rev. Chris Williamson and other pastors. During this time there were heightened tensions over the city’s proposal of removal of a statue of Confederate Gen. Robert E. Lee.

Williamson and his colleagues were thus mandated to provide proactive solutions surrounding the controversy of confederate monuments. In 2019, they managed to have five historic markers installed around the city square that shared the stories from enslaved people and African American’s perspective before, during and after the civil war.

The team managed to complete the last bit of the plan on Saturday with the installation of the monument.