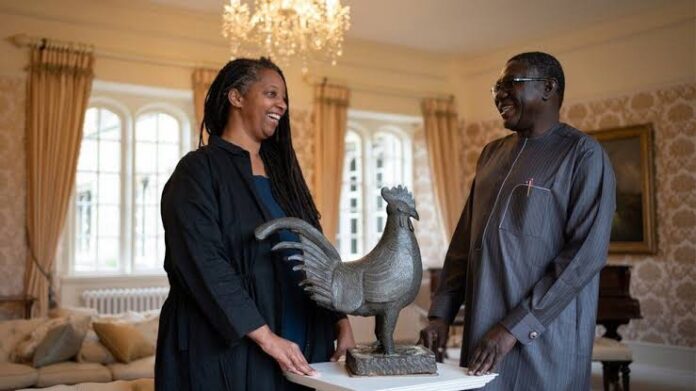 British colonial forces took the Okukor statue in 1897 from the Court of Benin, of present day Nigeria; among thousands of other artworks seized and looted by occupying British troops. This bronze cockerel was given to the college in 1905. And now, after over a decade, a Cambridge University college has handed over a bronze cockerel looted from Africa in the 19th century to Nigerian authorities; as part of a modest but growing effort in some European countries to return African art taken by colonial powers.

Jesus College is the first U.K. institution to give back one of the artifacts known as the Benin Bronzes. Speaking ahead of Wednesday’s ceremony, college master Sonita Alleyne called it a “momentous occasion.”

The college removed the Okukor bronze from public view in 2016 after students protested, saying it represented a colonial narrative. The college set up a working group that concluded the statue belongs to the Oba of Benin, head of the historic Eweka dynasty of the Benin Empire. The empire centered on Benin City in modern-day Nigeria.

His Royal Majesty, Oba of Benin, Omo N’Oba N’Edo Uku Akpolokpolo, Ewuare II, welcomed the Okukor handover decision. “We truly hope that others will expedite the return of our artworks; which in many cases are of religious importance to us,” he said in a statement. 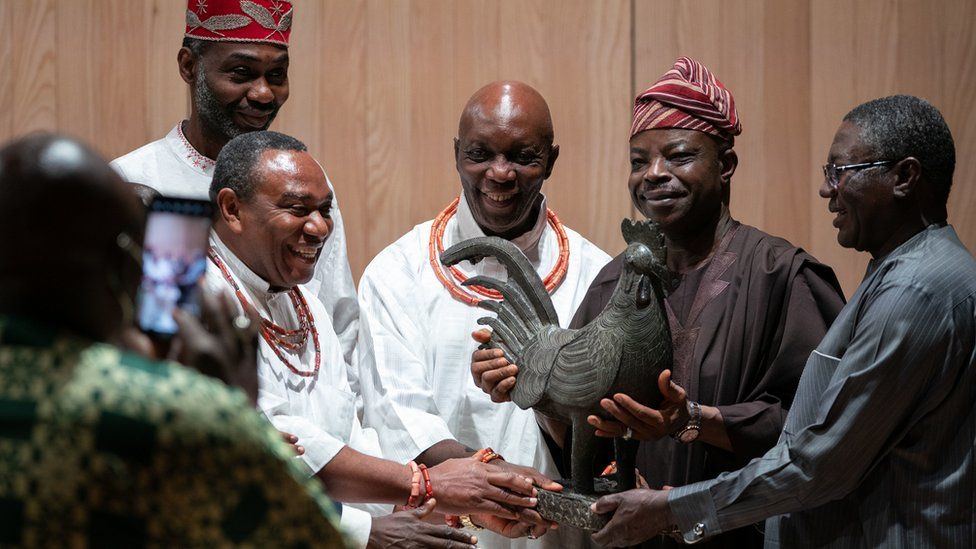 Hundreds of seized Benin Bronzes ended up in the British Museum in London, and hundreds more were sold to other collections such as the Ethnological Museum in Berlin. Germany this year said it would return the items in its possession.

The British Museum said Monday it is working on a collaboration with Nigeria; linked to the construction of a new museum in the West African country, which will allow to; “reunite Benin artworks from international collections.” The museum is also in a decades-long tug-of-war with the Greek government over a restitution of the Elgin, or Parthenon, Marbles.

Such returns are controversial in Europe, where many museums hold works acquired during colonial times.

Across the English Channel, France’s president on Wednesday announced the “rightful return home”; of 26 looted colonial-era artifacts being sent to the government of Benin – some of the estimated 90,000 African artworks held in French museums.

The wooden anthropomorphic statues, royal thrones and sacred altars from the collection known as the; “Abomey Treasures” were pilfered by the French army 129 years ago, and are currently on display in Paris before being handed over to Benin on Nov. 9.