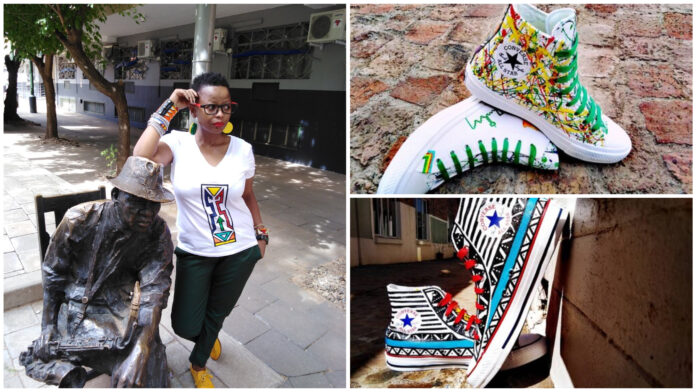 Thobile Ntuli who says she projects the “richness of African culture in a fashionable way,” founded a fashion company that specializes in manually adding beauty to dresses, sneakers, and hats, among other accessories.

According to the young Entrepreneur, her biggest motivation is her need to pass on the richness of the African culture through hand-painted artistic expressions on fashion accessories.

Thobile, who spoke at length in a reported interview, revealed that one of her motivations for venturing into this field is to help design the culture of Africa. She reflected on the days when young Africans would sit by the fire and listen to the elders tell beautiful stories.

“Since we are no longer sitting around a campfire for our elders to pass on the richness of our culture, why not do it in a modern and elegant way?” she said in an interview. With that in mind, what little she has learned, she is able to project into fashion designs to help sustain the culture.

The company name, Luthi Creatives was inspired by the entrepreneur’s grandmother. The company customizes shoes [(and other items)] based on cultural standards (mainly isiNdebele).

Her customers can bring their shoes or shop directly from the company as they deliver throughout South Africa. However, international customers would have to pay for shipping.

When asked about her future plans for the company and the growth she hopes to achieve, Ntuli said;

My future plan is to work with Converse one day, but I was lucky enough to work with a football team from Italy known as AS Velasca, courtesy of Zola Manqina (founder of Soweto Stars FC). Both teams are sponsored by Le Coq and I handpainted some Le Coq pairs for AS Velasca in Milan. I have high hopes that this union will bear more fruit in the future.