Nigeria is historically known as ‘the giant of Africa’ to Nigerians and the rest of the countries in Africa. This is partly because Nigeria has over 180 million people and that represents potential. It is an amazing country and there are so many beautiful places that will capture your attention when you visit Nigeria. Out of the many places in Nigeria, that you could visit, we have chronicled ten of the best places you should see when you are in Nigeria. 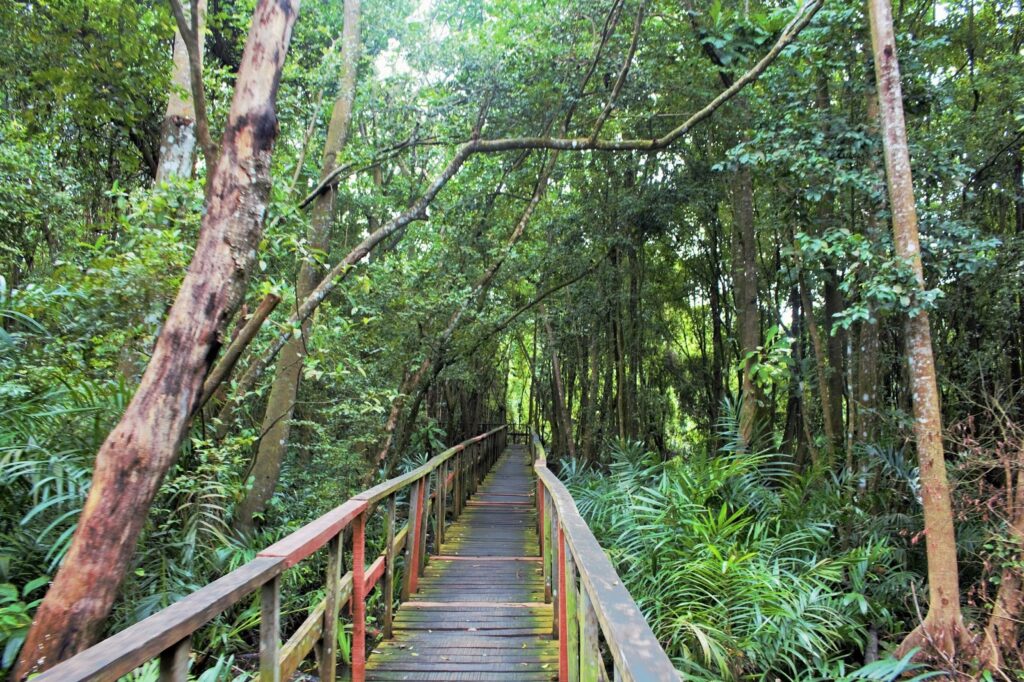 The Lekki Conservation Centre is located in Lekki, Lagos and is an amazing specimen of nature crafted within ‘busy bee’ Lagos. The highlight of the space is the suspended canopy walkway that rises over the reserve and is the longest in all of Africa.

The canopy walkway has six towers and is as high as 22 feet. It is connected to a series of suspended walkways. It offers a unique and thrilling experience. You get a 360-degree view of the conservation centre from high above the treetops. The treetop stretches to 1315 feet long and is the longest in Africa.

It was founded in 1990 and is home to many wildlife that include tortoises, monkeys and rare birds. It is located on Lekki Expressway and opens at 8 am and closes at 5 pm. You need about N2000 for entry and access to the suspended walkway. Have fun. 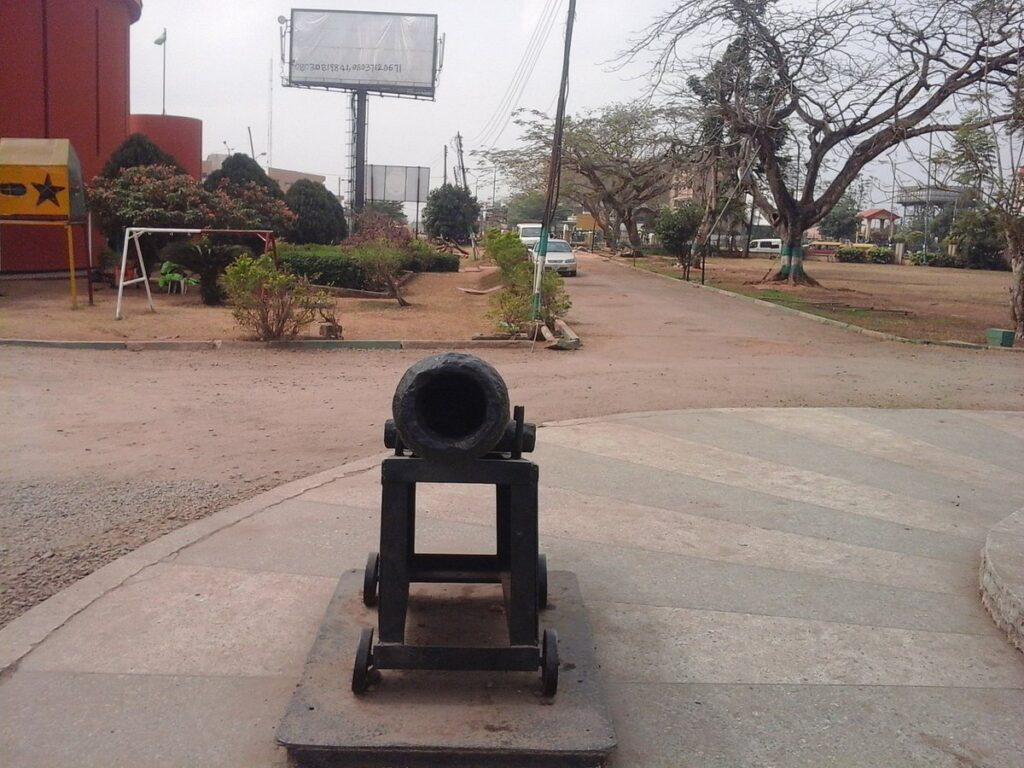 You can find the Benin National Museum at the King’s Square in the centre of Edo state’s popular Ring Road. You need to be careful of traffic as you walk to the entrance.

As part of a plan to upgrade the museum, NMAfA plans to send Alonge exhibit components to the Museum. The Museum began from the palace of the Oba in 1943 but the structure that stands in place now was officially open to the public on August 10, 1973.

Priceless artefacts grace the walls of the museum and include antiquities from the Benin kingdom and other parts of Nigeria.

When the Oba first began the first-ever version of the Museum, Benin traditional art was increasing popular and so to preserve it, he began assembling artefacts under the protection of Chief Jacob Egharegba in the Royal House of Iwebo.

As time passed, more people were interested in the treasures and external pressure caused him to decide on making the objects public. They moved the collection to a room in the old tax office, Ring Road, Edo state.

They eventually moved it to the Benin Divisional Council for more space and with the help of Mr. K.C Murray, who was a Surveyor of antiquities and an Arts teacher.

The Federal department now National Commission for Museum and Monuments took over custody of the artefacts in 1960. This institution was established under decree 77 of 1979 and from then the museum just kept expanding.

The building that houses the artefacts was built when Samuel Ogbemudia was governor in Edo state, then Bendel. The second or unit gallery was opened to the public in August 1996 via the efforts of Dr. O.J. Eboreime, who served as curator. 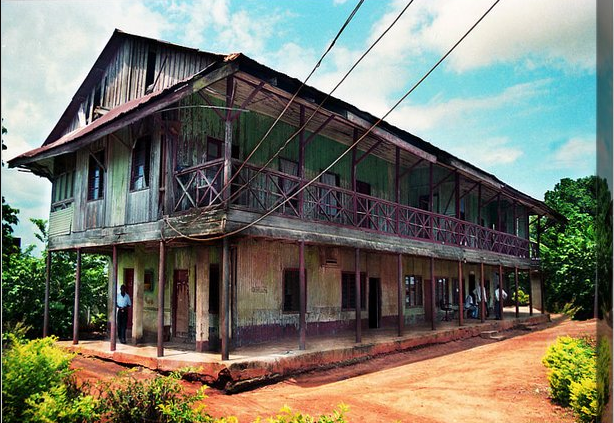 The Mungo Park House is one of the oldest standing structures in Delta State. The Royal Niger Company (RNC) constructed the house in 1886. It was used as a military house for administrative purposes. It was named after Mungo Park. Mungo Park is a Scottish man who was born in 1771 in Foulshiels, Selkirk, Scotland. He discovered the River Nigeria.

It is a national museum and is located along Nnebisi Road, Asaba. Delta State. It is not as well cared for as it used to be due to harsh weather conditions. Notwithstanding, the has a rich history and tells something of the journey to civilization and the happenings in Nigeria.

It served as a secretariat to many government agencies. The Mungo Park House is close to the Grand Hotel, Asaba. You don’t want to miss this tourist spot when you visit Delta State in Nigeria. 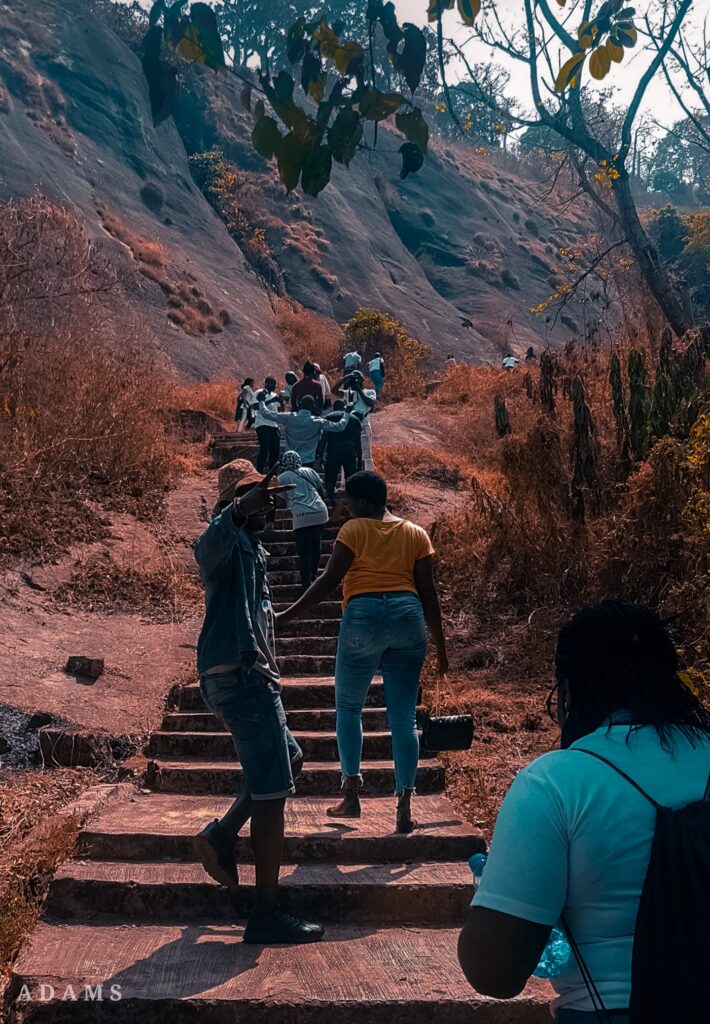 Idanre is a town that is some kilometres from Akure, Ondo. Akure, the capital of Ondo State rests its settlement close to the massive Idanre Hills. When you climb to the top of the hills, it is clear that it is one of the most sought after destinations in Nigeria. The rock formation, which surrounds the town, is indeed beautiful to behold.

Apart from the hike up the hill, there is an old school, Aghaga hill, and the  Agbogun footprint to admire.

You need about one hour to climb the hills and in order not to be tired, you can make stops along the way for taking pictures and catching your breath. You pay N1000 at the reception to gain entrance to such artistic ambience and colourful art expressions that surround this tourist spot. 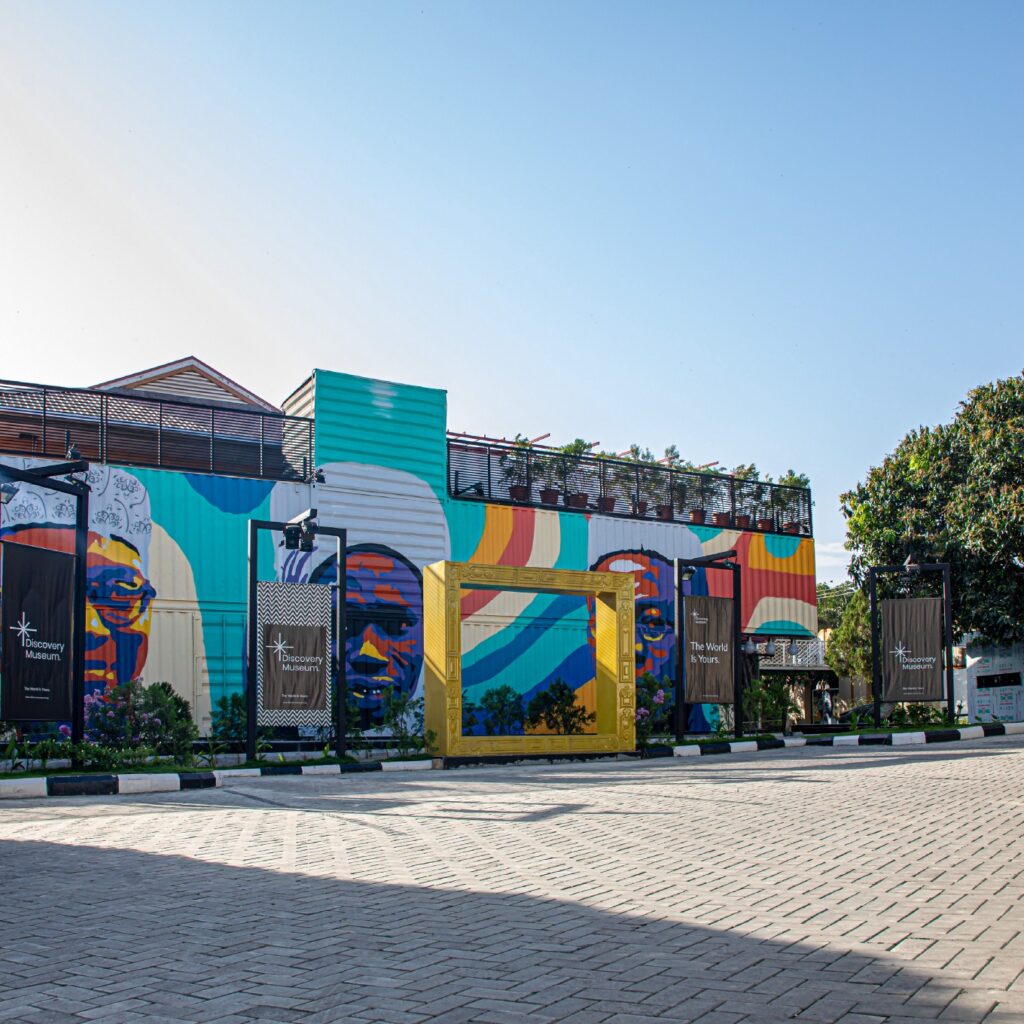 This beautiful spot in the capital of Nigeria is the focal point of the Art Tech District in Nigeria. It is the first in the region whose goal is to shape culture, people and express domestic ideals using technology and art.

The idea is built around creating a digital community of storytellers, techies and artists using innovation. Some of the methods to be utilized are curations, commissions and the acquisition of residencies.

The space aims to spark innovation and be a fuel for creativity for the goal of changing mindsets.

There is the opportunity to speak truth using art, media and other modern mediums to encourage and embolden the youth. The commitment is to democracy, human rights, freedom and equal rights for all. 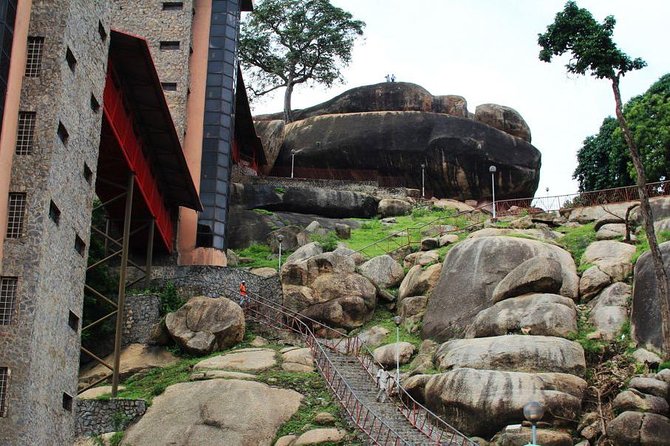 Olumo rock is a beautiful tourist spot and one of the most popular places in Abeokuta. It is as popular for the rocks embedded around the state as it is for the amazing Adire fabric that is made there. It attracts thousands of local and international tourists yearly.

The word Olumo means ‘God moulded’. Many wooden sheds make up the Itokun market, a habitat for craftsmen and traders. The people are very welcoming and teach tourists how they create Adire fabrics using ‘tie and dye’.

The spot is known for being a place of refuge for the Egba people during intertribal wars in the 19th century. The people hid in the rocks and found a shelter and a refuge.

When the spot was renovated in 2006, they included the building of a restaurant, a museum, a water fountain and an elevator, for those who are too tired to climb up or climb down.

You should have your camera to take smashing pictures of the scenery and a water bottle. It is important to dress comfortably. You can have a guided tour and get to see the best thing is the moment you get to the highest point of the rock. Don’t miss seeing the Ogun River. 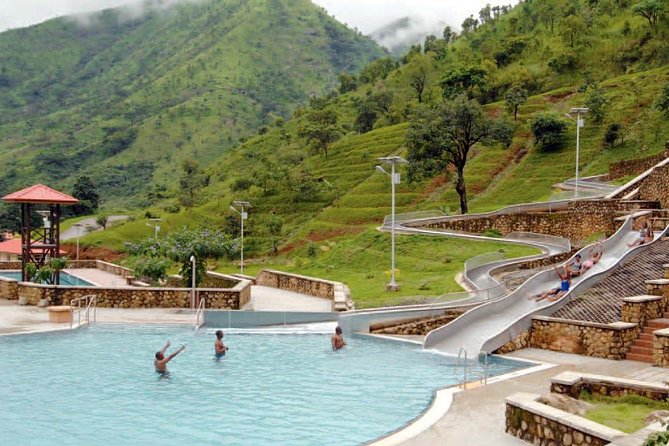 Obudu Cattle Ranch is now known as Obudu Mountain Resort. It can be called Africa’s finest and most spectacular tourist destination. You can find it on the highlands and it is surrounded by deep tropical forests of Cross River State. It has a temperate climate and is 45 miles away from the Cameroonian border.

This resort is popular in Nigeria, Africa, and its beautiful mountain area and the picturesque view is part of the attraction to tourists.

One of the activities you can carry out on the ranch is getting on the cable car. It can be a scary or a thrilling experience depending on your excitement threshold. It is the longest cable car in Africa and takes about 6 minutes to arrive at the resort. You can play outdoor games and participate in swimming, horse-riding, golfing and hiking.

Participate in the Obudu mountain race that holds in November every year with a rewarding cash price attached. You can also use their state of the art fitness facilities to stay in shape. Also thrilling is the walk on the Canopy Walkway which is a 100-meter swinging bridge.

From having a meal at the restaurant and taking advantage of the menu that includes local and international dishes, to going sightseeing, the fun never ends.

This is a very fascinating spot located in Enugu state. Beautiful trees of the Ngwo Pine Forest surround the Ngwo Caves and Waterfall, and the valley floors display a gently flowing stream of spring water.

This cave is made of limestone and formed naturally by the waterfall constantly dripping down a small opening in the roof of the cave.

The waterfall formed a shallow pool on the cave floor and flows out into a small stream. The stream has both warm and hot water flowing from the same source. Behind the gigantic mass of rock from which the cave emanates, more caves are carefully tucked into the rocks. Some are within reach and others can only be accessed if you can climb. 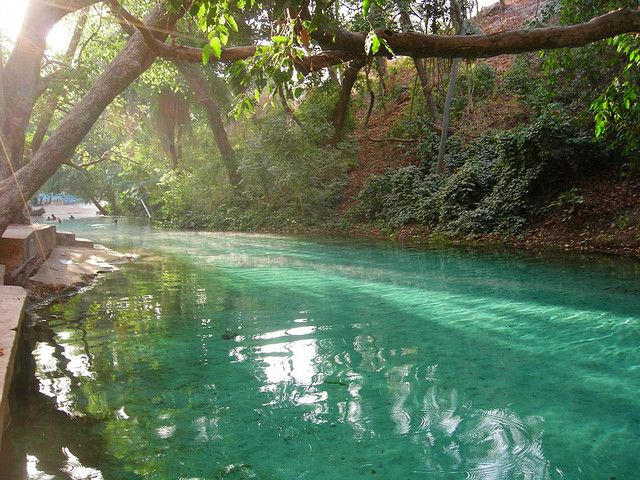 Abuja is a great central point for a National Park. If you are looking for excitement, you can possibly find it in the roaming herds of African elephants or in the search for relics of the early man who lived in the caves within the National Park.

More than 20,000 tourists visit the National Park yearly and participate in ecotourism. There are many lodges for overnight stays and the opportunity to have guided tours.

Look out for Kalban Hill and wonder at the chiselled rocks of the awesome Tonlong Gorge. 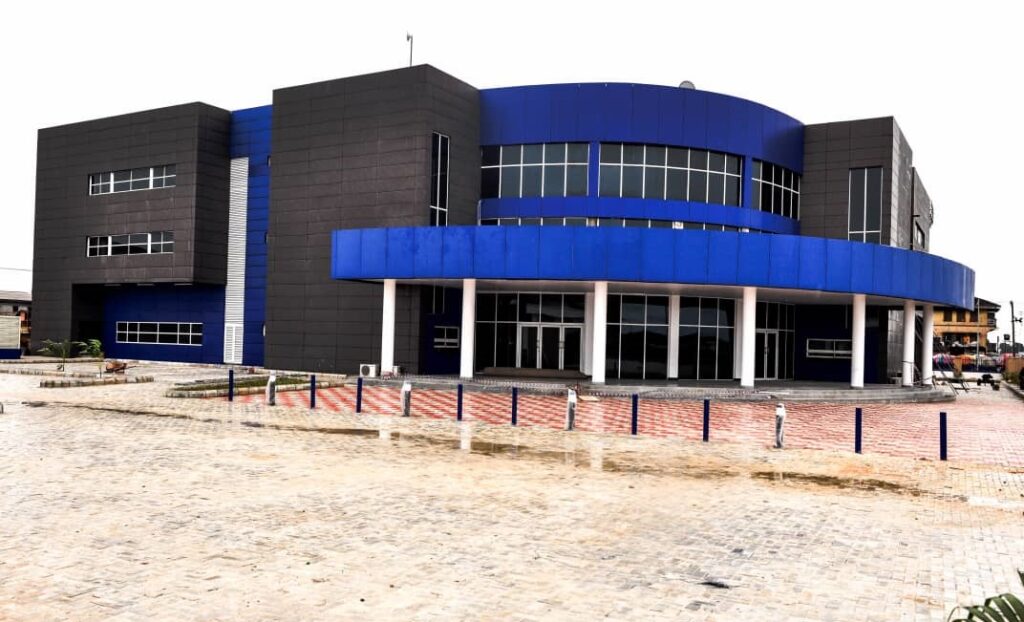 This is a prominent tourist destination and is located on Bonny Street, Port Harcourt. A centre shows relics and tells the antiquity of the city.

In Port Harcourt, it is pretty obvious that industry comes first with the oil boom that draws all kinds of stakeholders to the state. One of the fun sides of Port Harcourt is this cultural centre and its side attractions.

It also houses workshops where they sell replicas of the local relics, at the centre. Also included for sales purposes is an assortment of African jewellery, homewares, pottery and souvenirs.

There is also a theatre with a stage and auditorium where live performances are held with cultural dances and plays on display. This is a source of attraction for guests and tourists.

Also read: The Story of Viola Irene Desmond, the woman on the Canadian $10 bill