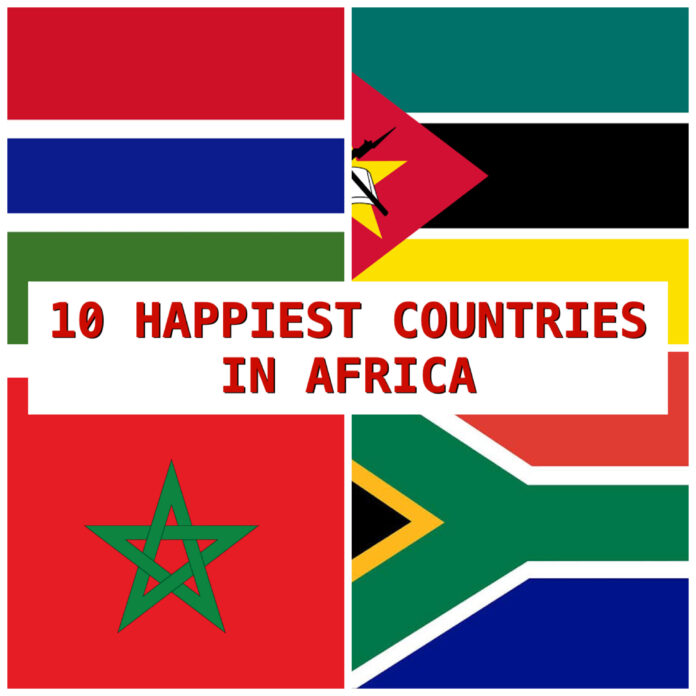 This list of the top 10 happiest countries in Africa will actually prove that Africans are indeed welcoming and lovely people.

The discussion of development and well-being is evolving in light of the World Happiness Report. It offers crucial glimpses of how people feel about the general standard of their lives throughout the world.

The top 10 happiest countries in Africa as of 2022 are as follows:

White sand beaches, azure waters, and gorgeous woodlands. It is simple to see this island off the east coast of Africa as a joyful place.

It appears that many Libyans are perplexed and even amused by the idea that their country consistently ranks among the happiest in Africa.

Even though it is still possible to be happy under less-than-ideal conditions, the World Happiness Report has not escaped noting the rising pessimism of the Libyan populace.

Visit this 26 million-person West African nation to learn about its coastal resorts, opulent jungles, and abundant animals. This attractive nation’s economy is expanding quickly, and it also produces oil and is the leading exporter of cocoa in the world.

Despite its high crime rate and unfavorable press, South Africa is ranked fourth among the happiest nations in Africa, indicating that something must be working in this remarkable nation.

The COVID-19 pandemic has had a positive impact on The Gambia’s economy. The trade and tourism sectors both make substantial contributions to the nation’s GDP. Currently, The Gambia ranks 93rd internationally and fifth happiest on the continent.

The sixth happiest nation on the continent is Algeria, which has the biggest land area of any nation in Africa. Algeria has moved up 13 spots in the world’s happiness rankings from the previous survey, moving from 109th to 96th.

Most of Liberia’s GDP is derived from its natural resources. The sector is not, however, properly under control. The economy of Liberia is, nonetheless, continuously growing.

One of the few instances where a poor country outperforms many wealthier ones in happiness is the Congo. The Congolese are living proof that contentment with one’s possessions is the key to happiness.

Anyone thinking about visiting Africa ought to make a stop in Morocco. Some of Africa’s oldest and most useful architecture can be found in the North African nation. The political climate in the nation is secure.

The majority of Mozambicans continue to rely mostly on agriculture for their livelihood. The country’s abundant beaches and islands make the tourism industry seem particularly promising.