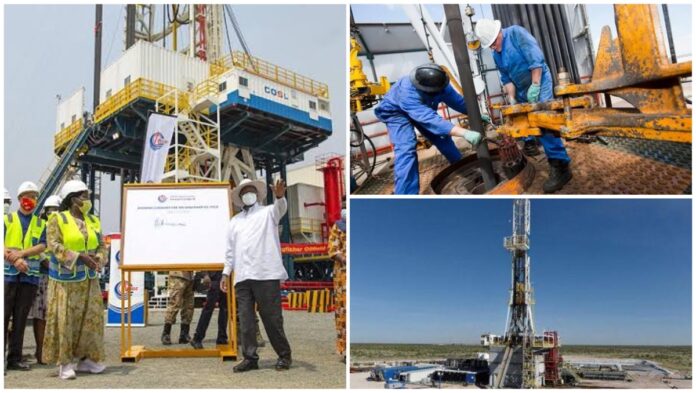 President Yoweri Museveni on Tuesday ordered Uganda’s first oil rigs to begin drilling at the Kingfisher field on the shores of Lake Albert as the country hopes to produce in 2025.

The other three systems will be installed in Tilenga.

Uganda has discovered oil reserves estimated at 6.5 billion barrels, 1.4 billion of which were recoverable nearly two decades ago in the western region of the Lake Albertine basin and in the Kingfisher and Tilenga oil fields.

Mr. Museveni operated the platform – the LR8001 luxury platform – which was installed in November 2022 at the Pad-2 site in Buhuuka village, Kibuube province.

It is operated by the China National Offshore Oil Corporation (CNOOC) and will start drilling 31 oil wells on four drilling platforms.

At current oil prices of about $87.5 per barrel, the Kingfisher project will account for 15% of total government revenue from oil exploration and production, which equates to $6.9 billion for the entire project, or $360 million annually, Ernest Rubondo, CEO. said the director of Uganda Petroleum Corporation.

France’s TotalEnergies Tilenga project – which will produce 190,000 barrels of oil per day – will account for 85 percent of expected oil revenues.

Mr. Rubondo said the Kingfisher platform will drill oil wells at different depths, with the shortest being about 2.6 kilometers while the depth is 7.4 kilometers, adding that the oil field stretches about three kilometers in the lake.

The project is set to produce 40,000 barrels of oil per day in 2025, but CNOOC officials are optimistic they can deliver the first oil early.

Uganda plans to export and refine oil and support industrial projects based on local petrochemicals.