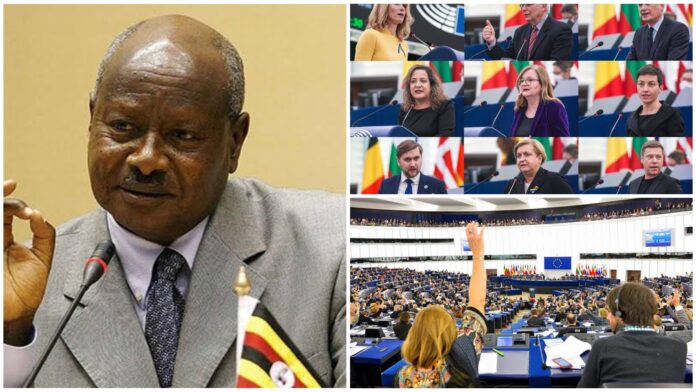 Ugandan President, Gen Yoweri Kaguta Tibuhaburwa Museveni described European MPs as “arrogant” and “insufferable” and told them they could not give him lessons on how to deal with the country’s oil projects.

Museveni described the MEPs’ resolve as intolerable and called them arrogant “boys and girls”.

He made his remarks during the Uganda Annual Conference of International Oil and Gas Summit at the Hotel Kampala Serena. Gen Museveni said he learned the meaning of the word “unbearable” in the more than ten years he spent studying the English language.

He then said that “some of these people”, probably members of the European Parliament, were “intolerable” and that they needed to control themselves or they would soon “explode”.

The President said that he would not accept advice from young people in the European Parliament.

“If you go to the European Union Parliament, there are only girls; a young woman is telling me what to do in Uganda!” commented Museveni.

“I think someone should advise these young people.”

General Museveni went on to remark that “these people” were very “shallow, self-centered and wrong” on a number of issues, but in his own words, they continued “believing they knew everything”.

He told “them” to “calm down” and stop spreading “their ignorance” because they “chose the wrong battleground”.

“Some of these MEPs are insufferable and so wrong that they think they know everything, but they should calm down. This is the wrong battleground for them. I hope that our partners will firmly join us and advise them. For us, we are moving forward with our program,” said General Museveni.

“The European Parliament itself has enough to do. I advise MEPs there to take a little longer. East Africa has more capable people who know what needs to be done.”

Uganda’s longtime leader, who recently celebrated his 78th birthday, has made it clear that he hates arrogance and that he and his comrades have spent a lot of time “solving problems with arrogant people”.

He then insisted that the oil projects would go ahead as planned. “Our oil exploration plans continue as before, despite misguided criticism from EU lawmakers,” he said.

The noise about Uganda’s oil projects and the European Union started when the European Parliament passed a resolution to block the EACOP pipeline.

Gen Museveni himself later clarified that no one, including the European Parliament, would stop Uganda’s oil projects. He even announced when Ugandans should expect the first oil drum to come out of the ground.