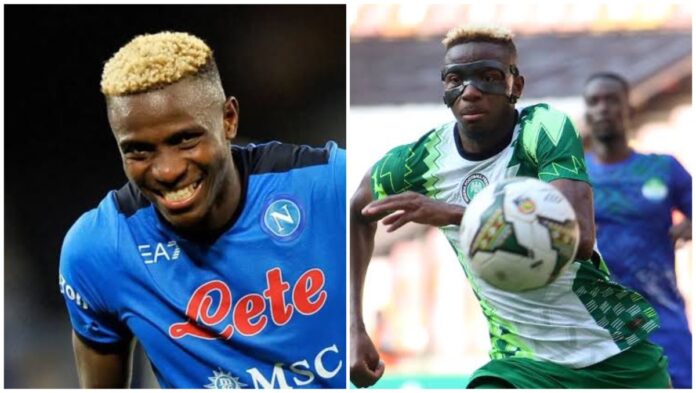 Despite missing five weeks with a hamstring injury, the Nigerian forward has so far scored seven goals in eight league games, averaging one goal every 93 minutes in Serie A.

The 23-year-old is behind the trio of Erling Haaland, Robert Lewandowski and Kylian Mbappe.

Norwegian striker Haaland, who joined Premier League champions Manchester City for £51.5m, has been named Europe’s most prolific striker so far this season, according to Corriere dello Sport.

Haaland scored 17 goals in his first 11 Premier League games, averaging one goal every 55 minutes. Lewandowski, Spain’s top scorer, is Barcelona’s second best player in Europe with 13 goals in 12 games. The Pole scored a goal every 73 minutes in La Liga.

In fifth place is Osimhen’s compatriot Terim Movi, who has scored eight goals in 12 Ligue 1 games.

The Nigerian international scored a goal every 108 minutes for Lorient, who are fourth in France’s standings with 27 points from 13 games.

Also, read; “Invest Instead of Sending ‘Young Girls’ to Lecture Me on Human Rights” Museveni Says

French striker Christopher Nkunko is sixth after scoring nine goals in 12 Bundesliga games – an average of one goal every 113 minutes.

Aleksandar Mitrovic of Fulham is seventh on record.

The Serbia forward, who is linked to the World Cup, has scored a goal every 114 minutes in the Premier League so far this season. He scored nine goals in 12 Premier League games.

Tottenham’s Harry Kane finished eighth after scoring 10 goals in 13 games, an average of one goal every 116 minutes.

Meanwhile, former U17 and U20 coach Manu Garba believes that if the Napoli striker continues in his current form, he has the potential to become Nigeria’s greatest striker of all time.

The late Rashidi Yekini, who scored Nigeria’s first FIFA World Cup goal and was his country’s top scorer with 37 goals, is arguably Nigeria’s greatest striker of all time.

“Currently, they cannot be compared and each is in its own chapter,” noted Garba.

“Osimhen was the top scorer at the U-17 World Cup and he is getting older and if he remains disciplined, flexible, focused and injury free, he will be one of the great strikers.

“What I can see is that Osimhen is the best of the current generation of strikers and has the potential to break Yekini’s record, but at the moment they are not up to it.”