What You Need To Know About Nigerian Civil War 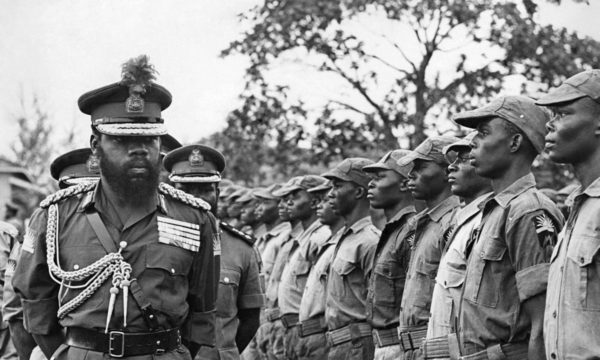 The historical Nigerian civil war, which lasted from 1967 to 1970, was a significant event that had a wide range of repercussions on Nigeria’s socioeconomic development.

The Nigerian Civil War, also known as the Nigerian-Biafran War, lasted three years and resulted in over one million fatalities.

The conflict broke out on May 30, 1967, seven years after Nigeria obtained independence from Britain, when the southeast of the country proclaimed itself the independent Republic of Biafra.

Nigeria has frequently had an unsteady peace since it was carved out of the western part of Africa by Britain without consideration for underlying ethnic, cultural, or linguistic boundaries.

After years of ethnic strife in colonial Nigeria, the three largest ethnic groups in independent Nigeria—the Hausa-Fulani in the north, the Yoruba in the southwest, and the Igbo in the southeast—experienced a critical mass of political unrest.

Under the direction of Major-General Johnson Thomas Umunnakwe Aguiyi-Ironsi, the Igbo conducted a coup d’état on January 15, 1966, in an effort to prevent the nation from experiencing what Igbo leaders thought would be political disintegration.

Soon after the successful coup, Hausa-Fulani Muslims in the north, many of whom opposed independence from Britain, developed a widespread mistrust of Igbo dominance.

The Yoruba west developed similar misgivings about the Igbo junta, which led to a united Yoruba and Hausa-Fulani countercoup against the Igbo six months later. General Yakubu Gowon, the leader of the countercoup, punished the Igbo.

The slaughter of dispersed Igbo inhabitants in northern Hausa-Fulani regions was the result of increased rage over the assassinations of important Hausa politicians.

The following year, Igbo separatists decided to establish Biafra as their own country as a result of this persecution.

Negotiations to end the crisis broke down less than two months after Biafra proclaimed its independence. The federal government in Lagos began a full-scale invasion of Biafra on July 6, 1967.

The Nigerian army surrounded Biafra and bombarded it with artillery and aircraft fire, expecting a swift triumph that resulted in significant civilian casualties in Biafra.

The Nigerian Navy also imposed a sea blockade that prevented the delivery of food, medicine, and weaponry, again having an effect on both civilians and military Biafrans.

Biafra held firm and refused to capitulate in the face of overwhelming Nigerian military superiority despite the lack of resources and international support.

However, the Nigerian Army continued to progressively encroach on new territory, and on January 15, 1970, Biafra submitted when General Chukwuemeka Odumegwu Ojukwu, the country’s military leader, escaped to Cote d’Ivoire.

It is impossible to overstate the varied consequences because many authors, both domestic and foreign, have written extensively from various angles.

A Brief overview Of the Nigerian Civil War

The Nigerian Civil War truly began on May 27, 1967, when Gowon, the country’s then-head of state, established 12 new states in Nigeria.

It should be remembered that Lt. Colonel Odumegwu Ojukwu served as the governor of Eastern Nigeria at the time, when Nigeria was still a regionalism-practicing nation.

Col. Ojukwu quickly proclaimed the Republic of Biafra in response to the expansion of states, which was an express violation of the Aburi Accord.

After making this announcement, the federal military government under General Yakubu Gowon (rtd) launched a police operation to put an end to the Eastern region’s secessionist agitation.

The insurrection began on July 6, 1967. The civil war was extremely brutal, far more so than most had imagined, leading to the extermination of Easterners and the death of a top-ranking Biafran general.

A second peace summit to end the civil war was held in Addis Ababa, Ethiopia, and four African nations—Gabon, the Ivory Coast, Tanzania, and Zambia—recognized Biafra.

By the end of 1969, Col. Ojukwu, the person who started the War, had left Biafran for unknown reasons.

Colonel Effiong signed a deal with the Nigerian federal government on January 10 that put an end to the 30-month conflict on the principle of “No Victor, No Vanquisher.” The conflict came to an end on January 1 after General Gowon agreed and signed the peace deal.

After the Civil War, the Federal Government began implementing the Reconstruction, Rehabilitation, and Reconciliation (3RS) agenda.

This was done in an effort to repair all of the harm caused by the civil war. Additionally, it serves as a means of demonstrating to the Biafran and Nigerian populations that they still reside in the same nation.

Causes of The Nigerian Civil War

The influential former politicians, especially those from the Northern and Western Regions, perished in the 1966 coup d’état.

It is completely unacceptable for Northerners to think that the Igbos plotted the 15 January coup in order to destroy their political fathers in their own eyes.

The Ironsi administration’s decision not to prosecute the coup plotters increased Northerners’ animosity toward the Igbo people.

They asserted that because people of Eastern extraction managed to flee the bloody coup in 1966, the Easterners encouraged the Northern Generals to murder their own citizens.

The current Head of State at the time, Major General Aguiyi Ironsi, an accomplished Igbo general, was assassinated in the second military coup on July 29, 1966.

The Easterners thought this was a Northern plan to get revenge for the injustice of the coup in 1966. Political tensions were rapidly increasing at this period as the crisis worsened.

One of the main causes of the civil war was Lt. Colonel Odumegwu Ojukwu’s unwillingness to accept Gowon as the new military head of state.

Ojukwu was the serving governor of Eastern Nigeria. Ojukwu claimed that Gowon was not qualified to lead the Army since he was a junior officer and could not lead a large organization.

The Massacres that Northerners committed against people from the South, particularly Igbos, before and after the military takeover that resulted in the death of former Head of State Aguiyi Ironsi.

This is undoubtedly the root of the civil war’s causes. The Igbos held that no government should have their allegiance if it is unable to fulfill its fundamental obligation of protecting its citizens.

the incapacity of the Gowon administration’s New Federal Military Government to halt northerners’ discrimination against Igbos and ensure their safety, both in terms of personal safety and property protection.

The chronicle of the American Civil War is significantly advanced by the failure to address such a delicate problem at such a precarious time.

This is due to the Easterners’ perception that the Gowon administration has sided with the Northerners, which is why he is taking credit for things while remaining unchallenged.

The Aburi Accord’s failure: Nigeria will adopt a confederal structure of governance with strong federating units and a weak center, it was decided at the Aburi Accord meeting.

The idea is that secession freedom will predominate and that Easterners will find it simple to secede at will. Gowon, however, increased the number of states in Nigeria.

the finding of oil in Nigeria’s eastern region: Any preparations the Gowon administration had to permit the independence of the Easterners were abandoned when oil was discovered in the Eastern area. This is due to the fact that finding oil is like finding treasure, and Nigeria cannot take the chance of finding such rich wealth.

effects of the Nigerian Civil War

The Northerners had the chance to build Northern hegemony and plant the Northern government system, which will act as watchdogs to ensure that the Northerners continue to control current politics. In other words, they had the opportunity to dominate the political landscape of the nation.

Because the Igbos accepted defeat during the civil war, even if it ended with “no Victor no vanquish,” everyone is aware of the ramifications of that and we have been reduced to mere spectators in the political arena of Nigeria.

This is demonstrated by the federal character, which is shared governmental positions. Depending on a quota system or state of origin, posts may be shared. This made maintaining the nation’s political unity increasingly challenging, if not impossible.

Increasing the number of States is one strategy to ensure that there will never be another secessionist movement.

The naval blockade during this civil war caused an estimated 3,000–5,000 people per day in Biafra to perish from famine. The world’s response to the military battle influenced how people today see and handle comparable crises.

The Organisation of African Unity (the forerunner of the African Union), whose member states tended not to encourage domestic secessionist movements, rejected Biafra’s fruitless request for assistance.

Ethiopia and Egypt, for example, publicly backed the policies of the Nigerian government to avoid instigating uprisings within their own borders. However, African nations like Tanzania, Zambia, Gabon, and the Ivory Coast supported Biafra.

One of the final Biafran strongholds, the provincial capital of Owerri, was taken over by Nigerian forces on January 11, 1970, forcing Ojukwu to flee to the Ivory Coast. Biafra surrendered to Nigeria four days later.