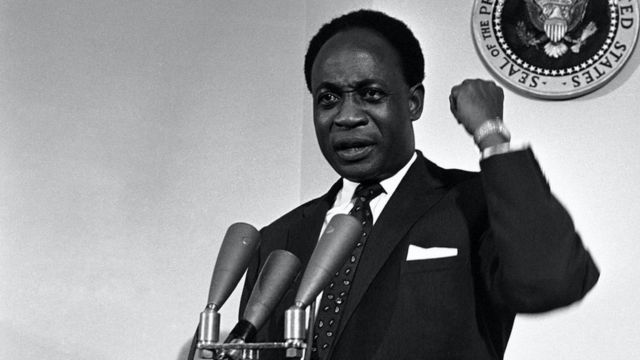 Kwame Nkrumah, the Republic of Ghana’s first prime minister (1957-1960) and president (1960-1966), was the first Sub-Saharan African leader to achieve independence. He later rose to prominence in the movement for the United States of Africa.

Kwame Nkrumah was a Ghanaian nationalist leader who oversaw the Gold Coast’s independence from Britain and its birth as the new nation of Ghana. He led the country from its independence in 1957 until he was deposed in a coup in 1966.

Nkrumah was born in Nkroful, Gold Coast, on September 21, 1909. He attended mission schools in Accra and government training institutes in Achimota (1926-1930), where he studied to become a teacher.

Kwame Nkrumah was born to a goldsmith father and a retail trader mother. Nkrumah, who was baptized a Roman Catholic, attended the Roman Catholic elementary school in adjacent Half Assini for nine years.

His father did not live with the family, but instead worked in Half Assini as a goldsmith until his death.

Kwame Nkrumah was raised by his mother and large family, who lived together in the traditional manner, with more distant cousins visiting frequently.

He had a carefree upbringing, spending time in the countryside, the bush, and the neighboring sea. According to Akan naming conventions, he was given the name Kwame, which is given to males born on Saturday.

During his time as a student in the United States, he was known as Francis Nwia Kofi Nkrumah, a name given to boys born on Friday. He then changed his name to Kwame Nkrumah in 1945 in the UK, preferring the name “Kwame”.

According to Ebenezer Obiri Addo’s research of the future president, the name “Nkrumah,” which is customarily given to a ninth kid, implies that Kwame likely occupied that position in his father’s family, who had multiple wives.

Kwame was his mother’s only kid. Nkrumah’s mother enrolled him in an elementary school run by a Catholic mission in Half Assini, where he excelled. George Fischer, a German Roman Catholic priest, was claimed to have had a significant influence on his elementary school education.

He began his career as a teacher at Roman Catholic junior schools in Elmina and Axim, as well as at a seminary, after graduating from Achimota College in 1930.

Nkrumah, who was becoming increasingly interested in politics, opted to further his studies in the United States.

He enrolled at Lincoln University in Pennsylvania in 1935 and graduated in 1939 with master’s degrees from both Lincoln and the University of Pennsylvania.

He also became involved in politics, reorganizing and eventually becoming president of the African Students’ Organization of the United States and Canada. In May 1945, he departed the United States for England, where he organized the 5th Pan-African Congress in Manchester.

While in UK, Nkrumah held prominent positions in anti-colonialist and Black-nationalist organizations, and he wrote divisive articles advocating African independence and unity. Nkrumah co-founded the Pan African Congress in 1945, which became a powerful voice against colonialism in Africa.

Nkrumah came home in late 1947 after being appointed general secretary of the UGCC. As general secretary, he addressed meetings all throughout the Gold Coast, attempting to build a mass basis for the new movement.

However, in 1949, Nkrumah left the group over political differences and founded the Convention People’s Party (CPP). During his time as CPP leader, Nkrumah opposed British rule and spearheaded various petitions for self-government.

Nkrumah was imprisoned by the British in 1950 for his political activities, but was released in 1951 when his party won a landslide victory in the general election. He was later elected Prime Minister in 1952.

Nkrumah spearheaded an aggressive campaign for independence as Prime Minister, which he gained in 1957.

On February 21, 1957, British Prime Minister Harold Macmillan announced that Ghana would become a full member of the Commonwealth of Nations on March 6, 1957.

Nkrumah was dubbed the Osagyefo, which translates as “redeemer” in the Akan language. The Duchess of Kent and Governor-General Charles Arden-Clarke attended the independence ceremony.

With over 600 journalists in attendance, Ghana’s independence became one of the most widely reported news events in contemporary African history.

Amon Kotei designed the country’s new coat of arms, which features eagles, a lion, a St. George’s Cross, and a Black Star, all with ample gold and gold accent.

Nkrumah advocated for pan-African culture, urging the establishment of international libraries and collaborative endeavors to study history and culture. He criticized the white superiority and Eurocentrism norms imposed by British curriculum and cultural organizations.

He wore a typical northern robe, fugu, but for ceremonies he wore Kente fabric from the south to emphasize his identity as a representative of the entire kingdom.

He oversaw the establishment of the Ghana Museum on March 5, 1957, of the Arts Council of Ghana, a branch of the Ministry of Education and Culture, in 1958, of the Research Library on African Affairs in June 1961, and of the Ghana Film Corporation in 1964. Nkrumah established the Institute of African Studies in 1962.

Nkrumah, a devout Pan-Africanist, formed partnerships with both Guinea and Mali and intended to establish a league of African republics with their own government.

In order to attain this goal, he and other African leaders founded the Organization of African Unity in 1963.

Nkrumah originally had cautious backing from both the United States and the Soviet Union, despite his decision to remain impartial in political activities outside of the African continent.

Nkrumah was a driving force for the formation of the OAU at Addis Ababa in 1963. He hoped to establish a unified military force, the African High Command, in which Ghana would play a significant role.

The attempted assassination of Nkrumah in Kulugungu in August 1962, the first of numerous, led to his further withdrawal from public life, the establishment of a personality cult, and a significant buildup of the country’s internal security forces.

Early in 1964, Ghana was legally classified as a one-party state, with Nkrumah as life president of both the nation and the party.

While the country’s administration slipped more into the hands of self-serving and corrupt party leaders, Nkrumah was preoccupied with the intellectual education of a new generation of Black African political activists.

Death and legacy of Kwame Nkrumah

While on a vacation to Beijing, China, Nkrumah’s government was ousted by a coup d’état in 1966.

He resided in exile in Conakry, Guinea, as a guest of President Ahmed Sékou Touré, who appointed him honorary co-president.

When his cook died suddenly, he became concerned that he would be poisoned and began storing food in his chamber.

He feared foreign operatives were reading his mail and lived in constant fear of kidnapping and killing. In August 1971, he travelled to Bucharest, Romania, for medical treatment due to declining health.

Nkrumah was laid to rest in a tomb at Nkroful, Ghana, his birthplace. While the tomb in Nkroful exists, his remains have been relocated to a big national memorial tomb and park in Accra, Ghana.

He was selected African Man of the Millennium by BBC World Service listeners in 2000, and the BBC describes him as a “Hero of Independence” and a “International symbol of freedom as the leader of the first black African country to cast off the bonds of colonial authority.”

Politically, Nkrumah was most recognized for his vocal support of and advocacy for pan-Africanism. His interactions with black intellectuals like George Padmore, W. E. B. Du Bois, and Marcus Garvey as well as their publications served as inspiration for him.